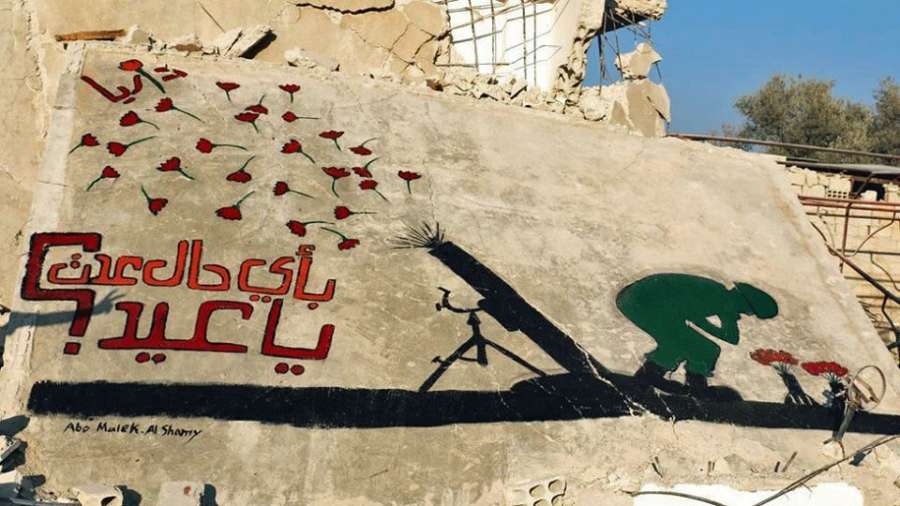 A Syrian rebel fighter has decorated the streets of war torn Damascus with brightly coloured murals.

Similar in style to the renowned UK street artist Banksy – one image shows a young girl standing on a pile of skulls writing a single word on a wall: Hope -Abu Malik al-Shami painted more than 40 artworks.

Like Banksy his paintings have often appeared suddenly and overnight and give a commentary on the bloodshed of the conflict.

The images are made even more striking because they are often on buildings which are in heavily bombed areas and so may only last a few hours or days.

He paints at night when there is a full-moon or by using the glow of a mobile phone screen being careful not to attract the attention of snipers.

He collected his materials by digging through the ruins of an art shop which had been destroyed by fighting.

Shami’s murals popped up in dozens of locations throughout Darayya, 10km from the centre of Damascus between the summer 2014 to summer 2016.

He told the BBC: “When I arrived in Darayya, I was completely shocked. There was huge destruction everywhere, and at that time, the regime was shelling randomly and attacking people. The situation was miserable, we couldn’t bear it. Everything was collapsing.”

He said: “The best times were sunset, or sunrise, or when there was quiet throughout the city. Sometimes we had to do it at night, so whenever there was a full moon, I used that time to paint murals. Sometimes I also used the light of my mobile phone. The process was very tiring. Every day, I used to fight on the front line, and only in my free time would I paint and draw.”

He told Syria Direct: “At first, I was afraid of how people would react to the paintings on the walls of their demolished homes. It’s something of an emotional subject. People here have lost nearly everything, and they have a very strong connection to their homes.

“People started asking who was drawing these murals. They started giving ideas, tips and good locations. They gave critiques for the paintings to be more beautiful and complete. People’s advice and comments gave me a lot of motivation to keep going, to make new paintings.”

As time went on Shami began to run out of paint and at one point he had only red, black, pistachio green, gloss yellow and brown to work with. He was also out of action for part of 2015 with a battlefield injury, and his partner was killed in 2015.

Each mural takes between two hours and two or more days. It depends on the size of the painting and the complexity of its colors.

He is no longer painting in Darayya and has moved to rebel-held Idlib in northern Syria where he continues his work.