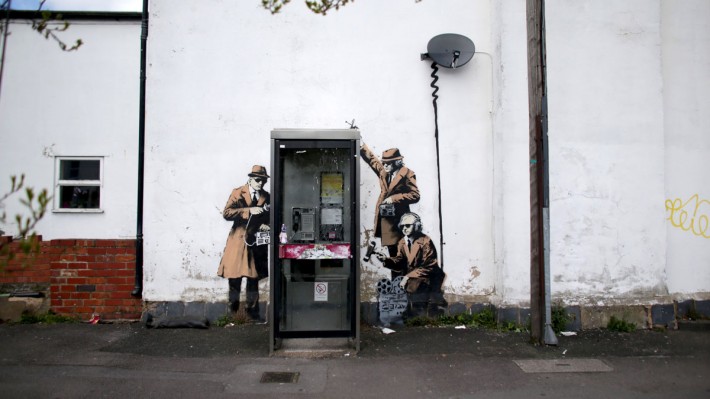 Elusive street artist Banksy has kept his identity a closely guarded secret – but now scientists may have tracked him down using a technique developed to catch serial criminals.

Researchers at the Queen Mary University of London used a method known as geographical profiling to pinpoint locations associated with Banksy.

It is a technique that typically “uses the spatial locations of crimes to make inferences about the criminal’s anchor point – usually a home or workplace”, says the Bristol Post.

The team used the locations of more than 100 of Banksy’s alleged works in Bristol and London to find clusters of “hot spots”, including a pub and playing field in Bristol and three addresses in the capital.

Many of the locations were associated with one person: Robin Gunningham.

“For Banksy junkies, this comes as little surprise; Gunningham has been suspected of being Banksy since 2008,” says Gizmodo. “Needless to say, Banksy is not amused.”

The site also points out that the method employed was “incredibly imprecise” as it uses only suspected cases of Banksy’s artwork and excludes outliers in the location data.

Lead researcher Dr. Steve Le Comber, a fan of the artist himself, told the BBC he did not believe his work had “unmasked” Banksy.

As the mystery continues, here are some other theories and key Banksy “sightings”:

Banksy meets The Guardian, 2003: One of the only journalists to have met Banksy is The Guardian‘s Simon Hattenstone. He described the artist as “white, 28, scruffy casual – jeans, T-shirt, a silver tooth, silver chain and silver earring. He [Banksy] looks like a cross between Jimmy Nail and Mike Skinner of the Streets.”

Banksy is “nice middle-class boy”, 2008: The Mail on Sunday broke the mould by running a sharp picture of a smiling, curly-haired man it insisted was Banksy. His real name is Robin Gunningham, said the paper, which also claimed he was a public schoolboy educated at the £9,240-a-year Bristol Cathedral School. Fans of the artist’s “anti-establishment stance” would doubtless be “shocked” to learn of his true identity, the Mail added.

Banksy self-portrait confirms his identity, 2009: When a Banksy “self-portrait” appeared on the side of an office block in east London, the Mail on Sunday felt vindicated. “The image is almost identical to the Mail on Sunday’s picture [of Gunningham],” it said. “It is possible the graffiti art was created by someone else,” the paper admitted. “But evidence compiled in a Mail on Sunday investigation suggests that Banksy is indeed Robin Gunningham – and that in his latest graffiti he has coyly acknowledged his unmasking.”

Mrs. Banksy unmasked, 2011: The woman sitting in front of a laptop looks like “just another unremarkable young professional”, said the Daily Mail. In fact, she is Joy Millward, the “very secretive wife of the world’s most secretive artist, Banksy.” Millward, a parliamentary lobbyist who is married to Robin Gunningham, declined to comment.

Banksy goes to the Playboy Club, 2011: Was that Banksy wearing a vicar’s outfit and a skull mask to a celebrity bash at the Playboy Club in Mayfair, London? Members of the paparazzi insisted it was; Digital Spy wasn’t so sure.

Banksy unmasked in Santa Monica, 2011: Another grainy, out-of-focus picture, this one taken in Los Angeles. It shows a man wearing a green baseball cap who the Daily Mail says has just painted the words ‘This Looks a Bit Like an Elephant’ on a container near a busy motorway.

Banksy in New York, 2013: One of the most recent pictures claiming to unmask the reclusive millionaire street artist was taken in New York in October last year. It shows a gaunt-looking man wearing a flat cap and “paint-spattered overalls”. The snap, taken by one of the stencil artist’s fans, was captured as a delivery truck being used to display one of his art works was parked on a Manhattan street. When a battery failed and the lights illuminating the picture of a lush garden went off, the man in the cap “sprang into action”. There were several men at the scene, but the one in the hat “stood out from the group”, said the Daily Mirror.

Banksy is a woman

A recurring theory is that “he” is in fact a “she”. Previous evidence supporting the “flimsy theory” that Banksy is a man is likely to be a form of “misdirection” planted by the artist herself, suggests CityLab writer Kriston Capps. “Girls and women figure into Banksy’s stencilled figures, for starters, something that isn’t true of 99 per cent of street art,” he says.

Canadian media artist Chris Healey has maintained since 2010 that Banksy is a team of seven artists led by a woman, although he refuses to reveal his “legit and reliable” source.

Should the quest to unmask Banksy continue? Salon thinks not. “It’s inevitably much more fun to think of some masked Warhol biting his thumb at the mainstream art world and taking the mystique of an anonymous graffiti tag to its inevitable conclusion,” it says. “Banksy is everywhere and nowhere at the same time.”