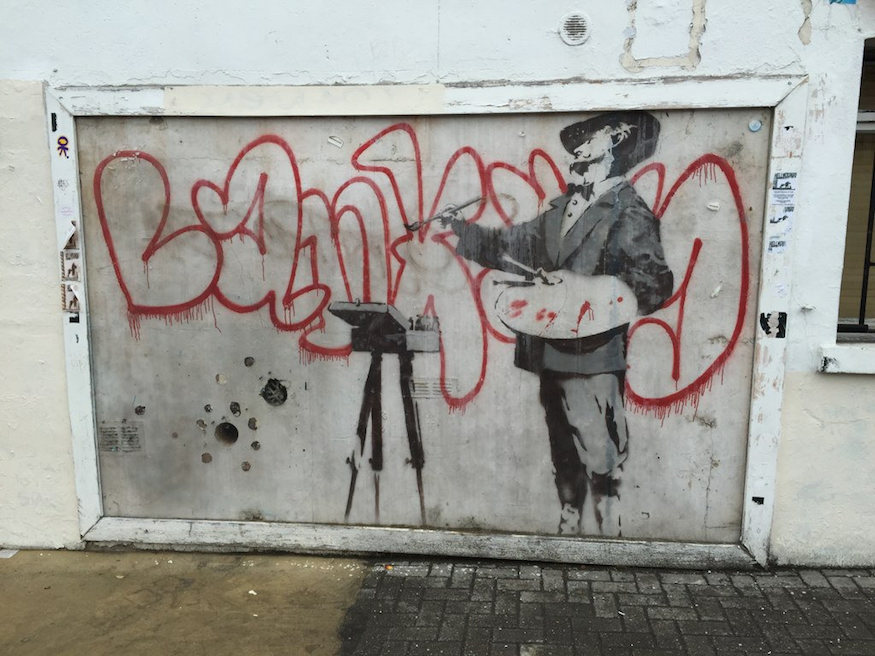 The days are long gone when street artist Banksy would regularly hit up the capital with new works. His mildly subversive pieces have arguably been surpassed by others, but thanks to stunts like Dismaland, he remains the most famous British street artist.

Many of his London pieces have since been erased, defaced and even stolen, but a few cling on around town. Here’s a guide on where to see his handiwork.

Banksy’s earliest works often featured rats. Many can still be seen, though often badly faded. We spotted this fellow lurking beneath London Bridge on Tooley Street. Another well-preserved rodent lurks on the banks of Regent’s Canal in Camden Town, while another can be found under the arches of Cannon Street rail bridge.

Perhaps the best-preserved rat resides on Chiswell Street, to the north of the City. This is one of numerous pieces that attracted the attentions of Team Robbo, supporters of a rival street artist who had a long-running spat with Banksy which peaked in 2009-10. Many surviving pieces by Banksy now feature Robbo’s name, and serve as a memorial to the artist, who died in 2014.

Look carefully behind a kebab-chippy, where Old Street meets Great Eastern Street. From certain vantage points, like the top of a bus, you can just make out a helicopter adorned with a pink hair bow. The piece dates back to at least 2003.

Councils and property owners initially treated Banksy like any other vandal, erasing his work from their walls not long after it appeared. With the artist’s rise to fame, though, his murals became valuable works of art. People began to protect the stencils with perspex covers. Several remain under screens to this day.

One example is a Banksy ‘Graffiti Area’ from about a decade ago. The wall is within the beer yard of Cargo on Rivington Street in Shoreditch, and is accompanied by pieces from other notable street artists.

Over at The Truman Brewery, on Brick Lane, you’ll find a pair of abandoned cars. They’ve been there for years. The upper one is a 2008 piece by D*Face. The lower, pink car was decorated by Banksy a year or two before. It once featured a skeletal figure behind the wheel, now covered by the chipboard. The car is protected by a perspex box, but it has nevertheless degraded over the years.

Various other works, covered by perspex though in a bad state, can still be found around town. These include the cash machine of Rosebery Avenue and a heavily tagged mural of children raising a Tesco carrier bag as a flag, on Essex Road.

A famous piece in Bethnal Green was painted in 2007, when we published photographs of the perpetrator who may or (more likely) may not have been Banksy. It’s since been tagged to an inch of its life, despite an attempt to cover the lower-left corner with a perspex sheet. Find it on Pollard Street, just off Bethnal Green Road.

Not many street artists last long in Mayfair. One Banksy piece is an exception. Known as Shop Till You Drop, it has clung to the side of a building in Bruton Lane since 2011. It was put in place using scaffolding, making it a tough proposition for anyone who might wish to deface it.

Banksy’s largely inaccurate portrait of the Royal family was painted as far back as 2001. It can still be found on Stoke Newington Church Street, despite several attempts to paint it over.

The artist does still occasionally reveal new work in the capital, such as a Les Mis-style piece criticising the Calais refugee camp, from early 2016 (it was soon removed). His ‘The Drinker’ sculpture (a pastiche of Rodin’s ‘The Thinker’) briefly reappeared on Shaftesbury Avenue in 2015 as ‘The Stinker’, thanks to the intervention of rival artist AK47. No doubt there will be other capital appearances for Banksy, but his London heyday is long past.