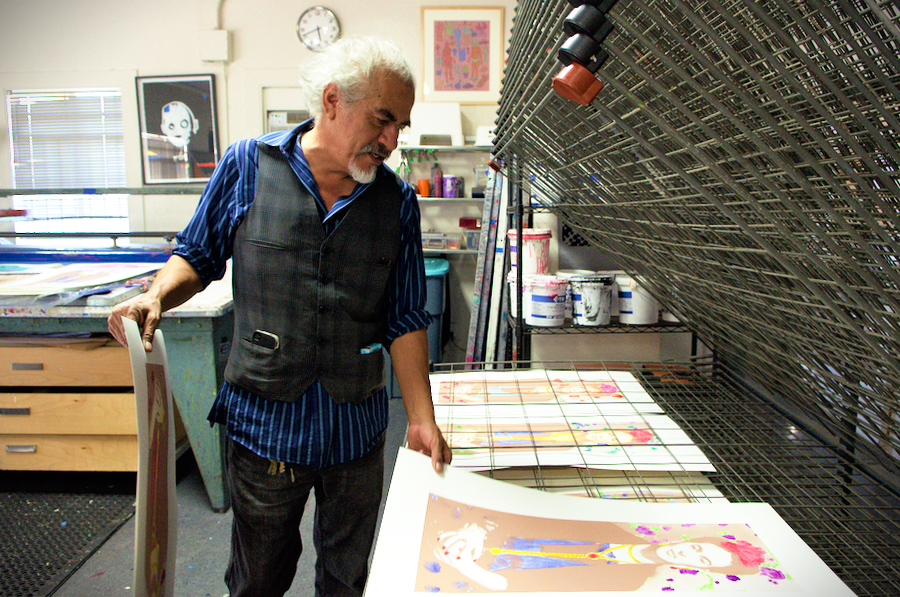 Modern Multiples is a renowned artists’ workshop and fine-art print publisher. Considered to be the West Coast destination for inventive printmaking techniques across nearly four decades, no other workshop is more closely associated with the heart of Los Angeles and its people. Learn more about founder Richard Duardo, a leader in the Chicano art movement and pioneer of artistic serigraphy in his own right and for today’s most respected artists in print.

Richard Duardo enjoyed record successes at Modern Multiples, the best fine art serigraphy studio on the West Coast, and in the art world at-large. In 2000, some years after his tenure as a board member at Los Angeles Contemporary Exhibitions, he was invited to sit on the Board of Trustees at the Los Angeles County Museum of Art (LACMA). Finding a lack of investment in contemporary printmakers and low membership retention for the museum, he positioned himself as the Chair of the Print Commission for the Prints and Drawings Council. His initial action was to commission new work from Los Angeles-based printmaking artists; the first time LACMA had commissioned printed work in nearly a decade. He first chose Salomón Huerta, an LA-raised and educated artist who ArtNEWS had just featured on the cover of their magazine entitled ’10 Artists to Follow Worldwide;’ he hired up-and-coming master lithographer Francesco Siquiero, who worked for Cirrus Gallery [the west coast publisher of Andy Warhol’s prints] to print the commission.

“Mind you, I’m Mexican American, the only ethnic representation on the board…” recalled Duardo in an interview with Karen Mary Davalos for UCLA in 2007. “I get the chair. I get a Chicano artist. Now I’m giving the job to [another] Mexican … And I can just see they’re just terrified … I’m just thinking, ‘Man, if they’d just look past this shit, something great is about to happen for this group.'”

Salomon Huerta’s commissioned print for LACMA was an instant success, bringing heightened visibility to both the artist and the institution. Duardo’s next recommendation — a simultaneous commission of work by Shepard Fairey and Raymond Pettibon — was even more viable, selling 200 LACMA memberships along with the limited edition prints within two hours of the opening reception. Similar success followed with his third recommendation, a commission of work by Camille Rose Garcia. Duardo also chaired the Membership Committee and the Newsletter Committee from 2000 until 2003, printing the institution’s news and getting it in front of a new generation of art patrons with his characteristic charisma.

I was just looking around going, ‘We’ve got to get real, we’ve got to reflect what’s going on,’ which is younger and more ethnically diversified. And that’s our board—that’s how our council is going to become invigorated. And by the time I left, the average age of the board went from age sixty-five to about age thirty, and I was proud of that. And it also went from about 80 percent male to about fifty-fifty [male and female], and I was proud of that, really proud of that,” Duardo remembered.

His studio booked out several months in advance with artists who recognized the massive impact of his vision on the art landscape, among them heavyweights Ed Ruscha, Jim Dine, and John Van Hammersveld. Duardo was busy and inspired. Then, one warm May afternoon in 2006, he received a phone call that would change his life — and cement the future of Modern Multiples.

“Hello there, this is a representative of the artist Banksy,” the voice on the other end of the line said. “Right, we’re putting on a show in Los Angeles this September and you were recommended by Shepard Fairey. We’d like to produce some prints with you.”

Excited, Duardo put together a package for the most famous street artist in the world. He sent off his quotes… and heard no response. “It was months of silence,” Duardo recalled. “I kind of figured we hadn’t gotten the job.”

Two weeks before Labor Day, the phone rang very early in the morning. Richard Duardo picked it up. The caller was Banksy himself.

Banksy apologized for the hour and the lack of response; he had been very busy, but his Los Angeles show was in two weekends and he needed to get the prints made. “How many prints and runs?” asked Duardo. “Seven prints; 150 of each; a few colors on each, maybe,” replied Banksy. “I don’t have them ready yet, but I can send some prelim sketches.” Duardo was flabbergasted. “Are you crazy?” he sputtered. “Seven prints, 150 of each, no designs, and we’ve only got 10 work days? Christ, it’s going to be Labor Day weekend, my team is overworked, I need to give them a break. I don’t think we can do this.”

“….Look, I know it’s tight. But I want to work with you, and I think we can do it. I’m flying out tomorrow. Let’s meet and go over the drawings,” said Banksy.

And so, less than 48 hours later, Richard drove to pick up Banksy from the friend’s house where he was saying, and they planned out the run in the studio. Duardo helped the artist realize his sketches into complete screen prints; making suggestions about what shapes and satirical symbols could be accomplished with speed and desired effect, and which would be too inconsistent. He convinced him to pare down his color palette and to use a few, key inks that would make the prints stand out brilliantly.

Incredibly, they realized, shot, and printed 900 works in the short time span they had together. The seventh print was never completed due to the time constraint. The last works came off the press the night before the exhibition. On September 15, Barely Legal opened in a downtown Los Angeles warehouse with a huge crowd of celebrities and art world leaders present (as well as painted elephants). Banksy sold out his ‘L.A. Set’ — comprised of the artworks Destroy Capitalism, Trolley Hunters, Grannies, Sale Ends Now, Applause, and Morons — for $500 apiece.

A decade later, a matched set from the original exhibition retails for roughly $140,000 USD.

Banksy, a loyalist to his roots, returned to his regular UK publisher Prints On Walls after the exhibition. In fact, the ‘L.A. Set’ was the only series he ever contracted to another publisher, making the Modern Multiples versions incredibly rare and valuable. But his visit made a lasting, additional injection of prestige into the studio. From 2006 until Richard Duardo’s death in 2014, his studio and the artists he worked with were fruitful. One of the last major projects he embarked on was a nationally touring print commission and exhibition with his friend Cheech Marin, a celebrity and major Chicano art collector. Called ‘The Chicano Collection,’ the project produced 115 archival fine art print sets — each containing 26 large-scale pigment prints of selected artworks in Marin’s collection, 26 linocut portraits by Artemio Rodriguez of each featured artist, a Chicano Visions art book, and a TChicano Collection documentary film. Fifty of the 115 sets were donated to major museums and universities across the nation, including Los Angeles County Museum of Art, the de Young Museum, and the Smithsonian Institution.

Richard Duardo never stopped producing his own work, challenging it to evolve as a response to the techniques he pioneered and the artists whose worked he helped to shape. He explained his myriad of influences to KCET in 2007:

“Marcel Duchamp, profoundly, blew me away. He just made me believe that you can do anything . . . Art finally talked to me when I was introduced to Marcel Duchamp. I thought then anything was possible, you’re as free as you want to be. My prints were always the ones that—as far as I’m concerned, I mean—was completely out in left field … There might have been an undeclared agenda, in order for the Chicano art movement to be identified as a genre, we all have to work within … the confines of certain—a catalog of iconography, and some political commentary. I just started to see the calcification of the medium, for Chicanos, as being just two steps removed from being a political poster or an event poster, just kind of too sentimental. I went, ‘You know, I just don’t want to play this game. I just want to find my own audience, direct.’ I think that’s why nobody on the curatorial side could ever nail me down, because I wasn’t sticking to one thing and methodically working towards an identity for this.”

After his death, a great deal of his work — which was exhibited in galleries across the United States but had not been discovered by institutions — became available for the general public to see for the first time. The Vincent Price Art Museum, the Muckenthaler, and the Mc Nay Art Museum are institutions who have recently hosted solo exhibitions of his work, and he has been in numerous group exhibitions both as a Chicano artist in the context of 2017’s Pacific Standard Time: LA/LA and as a contemporary pop artist.

“Richard was a force in the art community. He spotted talent, especially talent that wasn’t wholly developed yet,” says McNay Museum curator Lyle Williams. “He worked with so many important contemporary artists — it was that printing background that separated him from Warhol, that technical ability. He was able to teach that to others and that was really his great contribution.”

Shepard Fairey wrote about Richard on his website: “[Richard] was warm, charming, funny, and most of all, incredibly passionate about art and fine art screen printing. I was very impressed that he had worked with many of my art heroes including Keith Haring, Mark Mothersbaugh, John Van Hamersveld, Mick Haggerty, David Hockney, and Chaz Bojorquez. Richard was enthusiastic about my work, and encouraged me to step up the scale and sophistication of my prints with his help. In many ways, I owe the evolution of my fine art print work to Richard’s craft.”

Duardo’s legacy lives on in the work of the artists he helped bring fame to, and in his own exquisite — and explosive — ouevre of limited edition fine art screen prints.