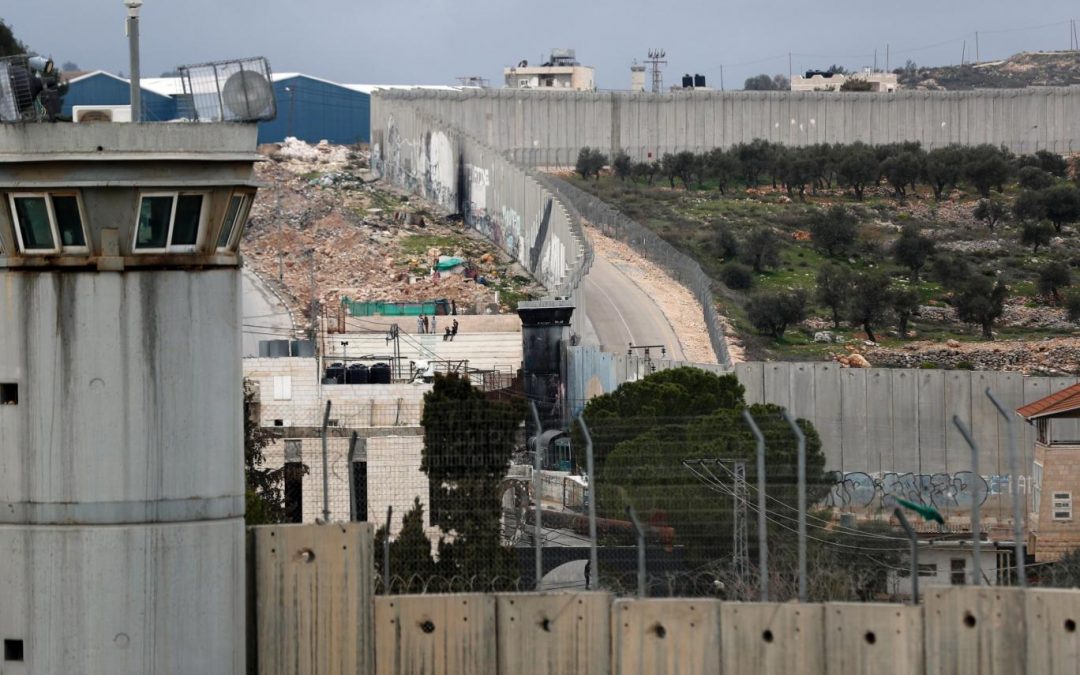 This Saturday a very peculiar hotel will take its first bookings. On the edge of Bethlehem it claims to offer the “worst view of any hotel in the world” – because of its location along Israeli’s separation barrier, a 400-mile wall that cuts through the West Bank.

Filled with provocative art, the Walled Off Hotel is the latest curve ball from world-famous graffiti artist Banksy. There’s just one problem: there’s already the Banksy Guest House in Bethlehem. It opened a decade ago. 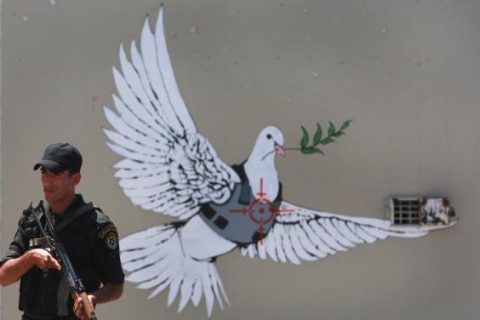 Banksy, whose works adorn parts of Israel’s separation wall, is claimed to have given a family-run guesthouse verbal consent to use his name (Getty)

Claire Anastas is a Palestinian Christian born and bred in Bethlehem. She and her husband were until recently owners of the only hotel along the separation barrier. Their small guesthouse, an apartment with four rooms that adjoins the Anastas’s own home, lets you experience for a night what the family endure daily – waking up to the sense of being imprisoned by the wall.

The guesthouse was originally called the Walled Guest House but Anastas says in 2007 she bumped into Banksy as he was painting a dove in a sniper’s crosshairs in a street near her home.

“He was painting the tail and I wanted to thank him for this message of peace,” says Anastas. “He introduced himself, was so kind and smiled at me and said, ‘Yes these are all my paintings’.” 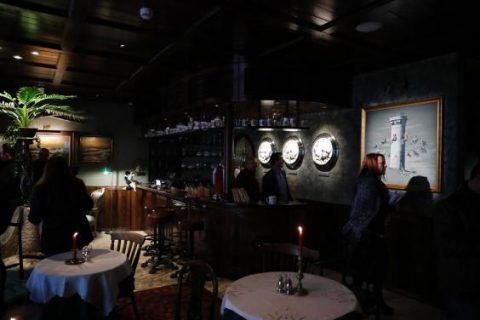 She says he gave her permission to sell prints of his paintings and use his name to market her hotel. She went on to call her lodgings Banksy’s Guest House on her website, though most know it as the Anastas House.

Is she therefore surprised that Banksy has opened a walled-in hotel so close to her own? “Maybe now he forgets,” Anastas says. “He met so many people.

“It’s going to hurt mine – of course,” she adds. But Anastas has bigger worries. She has only what she claims is a verbal agreement with Banksy to use his name for her own guesthouse.

Most tourists who stay with the Anastas’ find their house by chance. Some are led to the barrier’s 8-meter-high concrete walls, which divide Bethlehem from nearby Jerusalem, on a hunt for Banksy. Several of the artist’s stencils, such as that of a girl frisking a soldier, can be found in the vicinity. If they are able to tear themselves away from the diverse, moving graffiti that colors the walls here in Bethlehem, they might find Claire Anastas or her husband Johnny at their home and adjacent souvenir shop. 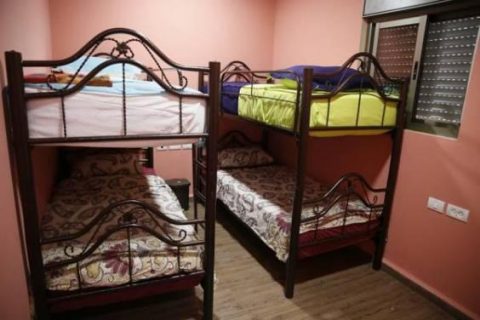 This was once a busy road and Johnny Anastas ran a successful mechanics business here. But after Israel put up the wall during the Second Intifada 2000, with the express aim of warding off terrorist attacks emanating from the West Bank, his business folded. They decided to open a gift shop and guesthouse after the sudden loss of the family’s main source of income.

A guest who stayed at the Anastas lodgings recently described it as a “truly memorable and special experience” on TripAdvisor while others praised the breakfast, and the homeliness of the rooms. But such things aren’t really the point. The Anastas hotel offers a stark glimpse of what life behind the wall is like for Palestinians and apart from aiding the family financially, they say that tourists staying have deterred once-frequent night-time raids by Israeli soldiers.

Claire Anastas concedes that it is possible that Banksy’s team had forgotten about, or weren’t aware, of her hotel. But most Bethlehem locals we spoke to knew of it. The first Anastas heard of Banksy’s Walled Off Hotel was last Friday when the artist’s plans were announced to the media. She thinks it “weird” that no one from Banksy’s team contacted her first: “It’s online. And they can find it on [Google Maps], because we put it there.”

The Independent asked Banksy’s representatives whether he had known of another walled-in hotel in the area before opening his own. They declined to comment. 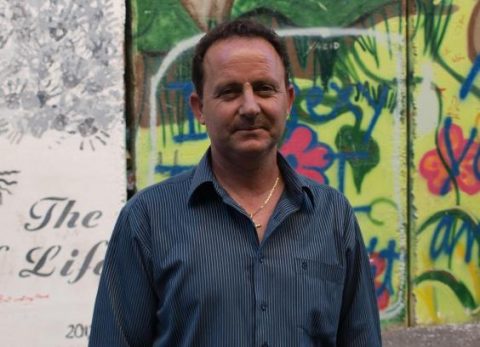 The Anastas family aren’t the only locals with concerns about Banksy’s new hotel, however.

“The idea to make this kind of hotel an interesting place for arts – I support this,” says Muhannad Al Azzeh, a local graffiti artist who was born in Dheisheh refugee camp, close to the wall. “But I’m against what people are saying – that this could be a [profit-making] business for Banksy.”

Al Azzeh is one of many local artists who are against having the barrier painted altogether; since Banksy’s first visit in 2005 parts of the walls have been covered in eclectic graffiti and murals by international and Palestinian artists. “I want people to see an apartheid wall, a military wall,” says Al Azzeh. “I don’t want them to discuss whether this painting is by Banksy, or whichever artist. I don’t want to forget all the Palestinian people killed there… when Israeli soldiers shot them.”

What’s more, some of the work by Banksy and other artists in the new hotel crosses a line for Azzeh. The painting of an Israeli soldier and Palestinian civilian fighting with pillows above a bed in one of the rooms trivialises the conflict, he says. And the much vaunted idea of Israelis visiting the hotel to have a new viewpoint on the conflict doesn’t impress him.

“I am completely against inviting Palestinians and Israelis to spend the day together in the hotel,” he says, adding that to him, such an approach does not tally with the struggle against occupation.

“I see how [Banksy’s] work brings a lot of people to Bethlehem to see the wall and the city,” says Ayed Arafah, another local artist. “But now all the people who come to take photos of the paintings and graffiti… it’s become like Disneyland. Like you are living in a zoo.”

Banksy’s representatives declined to comment when asked whether the artist had considered locals’ opinions before launching his hotel.

As for Claire Anastas, she’s holding out hope that Banksy will offer to support her humble hotel alongside his own. Guests have spoken warmly about her lodgings but Anastas says there are too few of them: “Once a month I have one guest come for one night. It’s not enough, at all,” she says. “I want to ask [Banksy] if he will help us as we are struggling.”