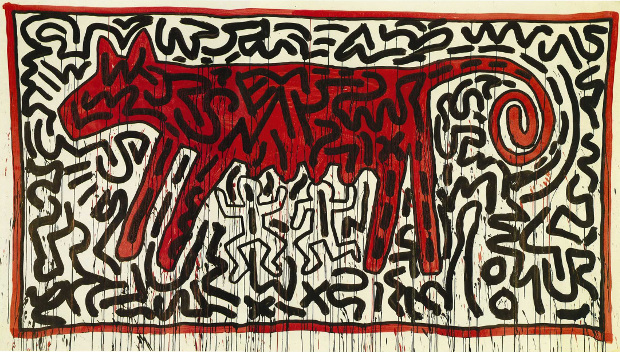 Sotheby’s Hong Kong Gallery is giving contemporary art collectors in Asia a taste of the evolution of street art through some of the world’s most prominent influencers in its newest exhibition, They Would Be Kings. In this show, which kicked off yesterday and coincides with Art Basel Hong Kong, works by internationally renowned artist Bansky are on display alongside creations by New York-based KAWS, as well as Keith Haring, Invader, Ron English, and Hong Kong’s own Tsang Tsou Choi, better known as the “King of Kowloon,” made famous for his obsessive urban calligraphy painting from the 1950s onward.

The curator behind the event is Steve Lazarides, a London-based street art dealer who is known for representing Bansky around the time street art emerged in the art collectors’ scene. While that relationship ended in 2009, he continues to showcase his collection, most recently curating an exhibition with Sotheby’s in London in 2014. In his London show, Lazarides brought together many of Bansky’s greatest pieces, both from his own collection and privately owned work never before displayed to the public.

Lazarides brings in other street art greats in the Hong Kong exhibition at S|2, Sotheby’s haute couture private gallery, taking viewers back to the 1960s to the pioneering works of Brooklyn-based artist Jean-Michel Basquiat and social activist artist Keith Haring. These give way to present-day symbols of the style like Brian Donnelly, better known as KAWS. Some of the works on display are most likely pretty familiar to Chinese collectors, who have been paying attention to Western street art exhibition debuts in China in the last few years. For example, the KAWS Clean Slate sculpture came to Hong Kong in 2014 and made its first appearance in Shanghai early last year.

Street art has been growing in popularity among investors around the globe in recent years, but it’s also a category of contemporary art that has been pushing its way to the forefront of Chinese consciousness, especially as China’s rich grapple with a slowing economy and look to diversify assets through investments in the Western art market. In fact, the timing of Sotheby’s event follows a series of major street art exhibitions and events in Hong Kong that have been garnering attention ever since Bansky’s work first made its debut in Hong Kong in 2008.

In 2014, Hong Kong kicked off its first international street art and graffiti festival, Hkwalls, which gives both international and local artists a platform for showing off their work. Following that,Pearl Lam Galleries in Hong Kong’s Soho area hosted a street art exhibition Hidden Street late last year, which showcased the creations of nine Hong Kong-based artists. Lam told Art Radar at the time that she thinks urban art has grown in popularity in Hong Kong, but “it has been underrated for many years.”

The title of Sotheby’s exhibition borrows a term within the graffiti artist community, “kings,” a status symbol so declared by Basquiat that he used crowns in his work. In this case, it also refers to the tastemakers in urban art as a whole, and it’s through these artists that collectors can get a sense of the practice, one that Lazarides believes is a “philosophy” more than anything else.

“[Street art] is about a sense of freedom from the frankly boring and blinkered confines of the traditional art world,” he says. “These artists forged their own path; they bludgeoned their way into the public consciousness, and then were finally noticed by the art world.”