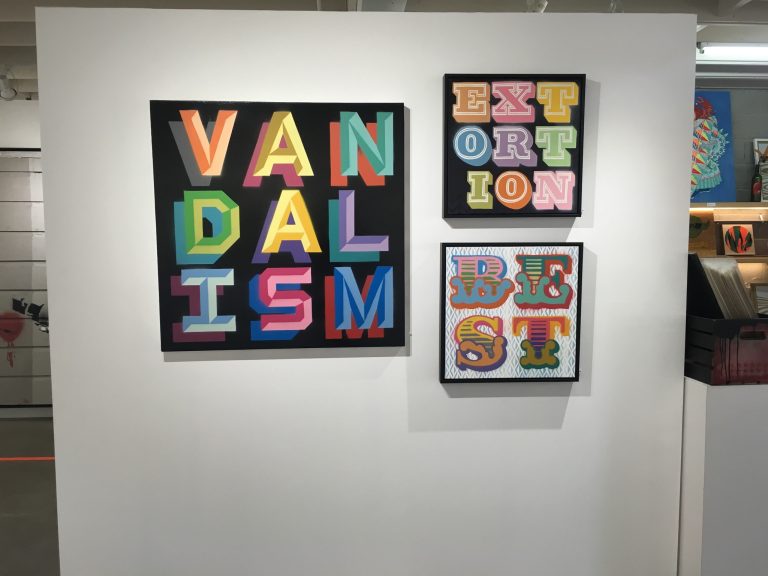 As rats go, he looks endearing with a furtive expression, cap on stylishly backwards, spray can in paw and tail erect, alert to danger. Banksy, the British artist who created the outsized piece of street art known as the “High Street Rat,” is equally furtive nowadays, one suspects, more for commercial reasons than for fear of landing in the slammer for the still clandestine but increasingly popular art form that some still vilify.

As illustrated by “Pageant of the Vandals,” a current group show exhibit at Artists Republic gallery in Laguna Beach, Banksy and company have fans who staunchly defend their efforts to make dull and decrepit environments interesting, fun and socially relevant.

Among the fans is film maker and art collector Brian Greif, who rescued the “High Street Rat,” from destruction.

Creator of several signature tags across the Bay Area city, Banksy put up art around the city in 2010 to coincide with his acclaimed documentary, “Exit Through the Gift Shop.” And now the rodent, once painted on a wood slatted wall of a San Francisco bed and breakfast, but not the elusive spray can virtuoso himself, has come to Laguna Beach.

“It’s an honor to host an original Banksy piece with historical significance in Laguna Beach and Orange County,” said Torrey Cook, who co-founded Artists Republic in 2010. “It’s cool that a little hole in the wall space helps to promote new contemporary art in a place not really known for it,” Cook said of her gallery.

Greif owns the 430-pound rat now valued at roughly $700,000. “I will not sell him but will share him with the public which is the whole idea behind street art,” he said.

Greif said he came by the rat after trying to save other Banksys that had been painted over by the city as quickly as they had gone up. “It took months of negotiation to get it down and preserve this piece. It cost $10,000 in insurance fees alone,” recalled Greif, who recently finished another documentary, “Save The Banksy.”

“Banksy painted more than eight pieces and they have all been destroyed even though the people enjoyed them,” said Greif. “The city considered it graffiti.”

“Pageant of the Vandals” was curated by Cook; Ryland Behrens, founder of the Hexagon Gallery, an on-line or private showing concern he shares with business partner Grant Cooper; and Ben Rubin, a local resident coordinating shows with Elephants & Castles, an international art agency.

“I have a collection of Banksys but will not sell his paintings anytime soon since they have growing historical value,” said Behrens. Instead he offers Banksy prints here in a set of six for $205,000. “I will not break it up,” said Behrens.

When it comes to evolved street art, Banksy is in good company, as the exhibit through Oct. 20 at 1175 S. Coast Highway illustrates.

Beau Stanton, a Laguna College of Art and Design grad and current Brooklyn resident, describes himself as a multi-disciplinary artist whose oeuvre includes street art. His work draws from historical art themes such as his “Submariner,” whose style has elements of turn of the 20th century decorative art. “I aim for subtle intellectual content incorporating archetypes and icons, esoteric elements,” he said.

Ben Eine, another Brit, represented here with another example of his colorful graphic lettering, has produced some of Banksy’s work in his print house and gallery “Pictures on Walls.” Locals know him for the “Charming” mural he painted on an apartment near Boat Canyon Road and Coast Highway. British Prime Minister David Cameron made a gift of an Eine piece to President Obama.

Zio Ziegler, whose work Artists Republic has exhibited previously, could be a reincarnation of Picasso with his canvases featuring expressive, distorted faces and figures inspired by Asian, African and Aztec cultures and innovative use of color.

Freeway commuters will remember his 15,000-square foot mural on a Tilly’s building in Irvine, one that met its end when a city permit lapsed and was not extended. Cook considers the mural’s existence proof that the street art movement has taken hold in Orange County.

Jeff Gillette, of Costa Mesa, participated in the groundbreaking 2010 Laguna Art Museum “Art Shack” exhibit. He calls his “street cred” limited, but makes what he describes as “worst case scenarios.” Gillette collaborates with a young artist in India whom he taught how to make his “Minsky,” a cross between Mickey Mouse and Banksy’s rat. His paintings featuring urban slums in India and elsewhere and are often supplemented by incongruous images of Disney characters. He made his international debut with “Dismaland,” a series of paintings exposing the happiest place on earth as anything but.

The version in the gallery exhibit was inspired by Hiroshima after the atomic bomb, said Gillette. He calls street art a formidable 21st century phenomenon that has caught on with the art world as well as the public. “There are lots of ugly walls that line hundreds of miles of freeway in Southern California that would look a lot better with art on them,” he said. “I suggest a program where artists are given paint, scaffolding and stipends to paint all of them.”