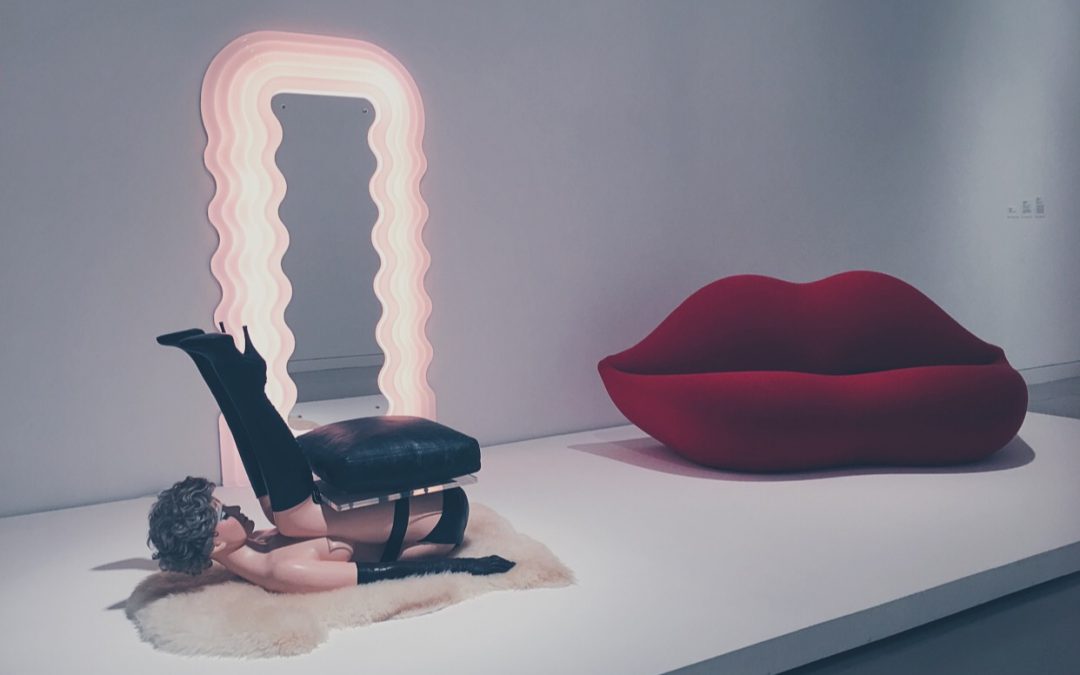 The Orange County Museum of Art is small for an institution representing the aesthetic tastes of an entire county. What it lacks in size or scope, however, it makes up for in a decidedly stylish take on post-modern and contemporary art. Its permanent collection is comprised of over 3,000 works of art and design from the twentieth and twenty-first centuries, largely from California artists.

Large scale installations and more at the museum of art in Orange County.

Pop Art Design, on view from January 7 – April 2, 2017, was an exhibition characteristic of the museum’s post-modern panache. Hexagon Gallery visited the exhibition to learn more about Pop art’s relationship to contemporary artists who use mass production as their vehicle, such as Banksy

Pop Art Design opened into a gallery graced by an Eames chair, designed with form and function in equal undulating parts, and a powder-coated steel television set. The furniture pieces, both made in the mid-1950s, were a marvel of modern material capabilities, and were highly valued for their ease of industrial mass-production.

Pop art and furniture at OCMA.

The next room featured a well-organized but slightly psychedelic assemblage of furniture from the 1950s and early 1960s — multiple Eames ‘Molded Plastic Side Chairs’ in sherbet colors hung from one wall, with a giant cartoon-y urban landscape (in equally dessert-like colors) hung across an adjacent wall. The wall, meant to represent a period department store display window, was largely enclosed in a glass box, and the box housed two molded fabric side chairs (the red one was shaped uncannily like a heart) along with a chaise that curiously resembled a life-size, supine paper cutout of a stick figure. In the center of the room, arranged on a raised platform as if to elevate their importance, were yet more artistic, minimal, and starkly colorful pieces of furniture.

Following that ode to new materials and dyes in mass-manufactured furniture, the exhibition turned to artist reactions toward the emerging consumer society. Andy Warhol, the king of twentieth century Pop Art and unarguable influence for street artist Banksy, was represented by a long row of Mao Tse Tung silkscreen prints in a bevy of bright colorways. Along with giant toiletries from Claes Oldenberg, the third room contained a series of photographs documenting the inventive department store and trade show sets devised by Warhol, Rauschenberg, and Oldenberg in the late 1950s.

These images were shown alongside photographs of these same artists’ early exhibitions, which were clearly informed by their commercial trades and by the repetitious displays of the modern supermarket. One such photograph is of ‘The American Supermarket,’ a 1964 exhibition which cleverly merchandised Warhol’s soup can paintings (and accompanying real Campbell’s soup cans), Oldenburg’s plastic food, and Rauschenberg’s posters or prepackaged meats as though visitors were shopping at a food store rather than an art gallery.

Tabacco Rose on view at OCMA.

Mel Ramos’ screen print ‘Tabacco Rose,’ on view in the same room, is a fantastic example of an artist whose sly combination of popular motifs evokes clever satire, no doubt influencing screen prints by Banksy and other contemporary artists. From the museum: “This brightly rendered screen print, which portrays a nude pinup model lounging on a Phillip Morris cigarette box, plays up the relationship between eroticism and consumption. To this end, the work — realized with the printing technology commonly employed by mass-production — exemplifies a Pop aesthetic by beckoning viewers to see the pinup model and the cigarettes as objects that are equally branded by American culture and therefore comparably consumable.”

Eroticism and consumerism permeated the rest of the Pop art exhibition. The late 1960s and early 1970s introduced widespread psychedelic drug usage and the free love movement against a backdrop of the Cold War, the Space Race, wars, and massive changes to the job market as more operations were mechanized or sent offshore to be produced in developing countries.

Among the highlights of the last two galleries in the exhibition was Eero Aarnio’s iconic “Egg Chair” furniture, designed like space pods with sturdy wraparound sides and top and personal built-n speakers for effective isolation. There was also a giant red stackable piece of furniture, which resembled a puffy rectangle with squiggly cutout shapes. This too was designed to give sitters a sense of isolation, with the freedom to sit on any configuration of perches, and to stack multiple pieces for infinite configurations. Giant pills and capsules created by Claes Oldenberg accentuated the psychedelic, haunting feel of the rooms.

Just past a small room that played noisy looped video footage of Las Vegas’ cheap and abrasive Strip in the 1970s and of huge crowds maneuvering up and down the streets of Manhattan, the exhibition concluded with darkly clever odes to Pop, sex, and consumerism. A bright red fabric love seat that was designed to resemble big red lips was perched on a platform across from a chair formed by a mannequin of a bondage-clad woman lying on her back with her knees pushed up to her chest and her feet in the air to form a chair seat and back. The scene was completed by a mirror in a wildly rippling frame made of rainbow neon tubes.

An early painting by Ed Ruscha.

Pop art had its roots in the optimistic possibilities of mass production and post-WWII materials, but also in the instability of governments, jobs, safety, and traditional social mores. Pop Art Design at OCMA was a journey of ideas that led to the conclusion of art and design as being capable of satire in their form and production, as well as in their content. It is clear that artists such as Banksy are highly influenced by the communication style of Pop artists in the 1960s and 1970s, and Hexagon Gallery gained insight into some of the most timeless and collectible works of the era.