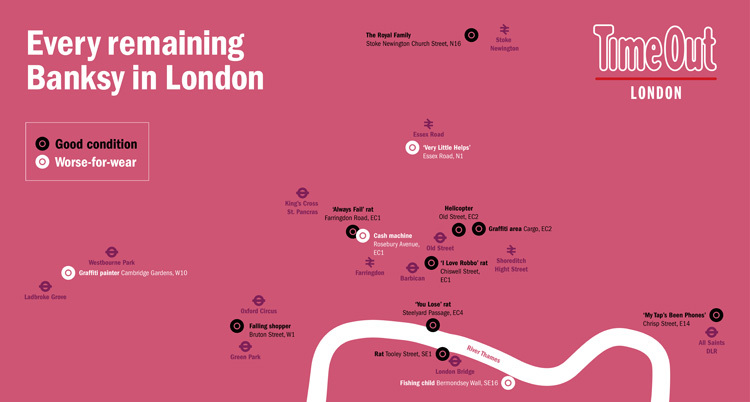 Perhaps no other artist’s work is more at-risk in the street than those thrown up by Banksy. Despite his best intentions to beautify a location an place very expensive works in public for free, Banksy’s street pieces in his native England and abroad face threats from many angles. Threats come in the form of profit hungry opportunists such as Keszler Gallery, official government graffiti task force divisions, and other lesser artists spot jockying to have their works seen next to a Banksy.

As his worldwide hold over the collective consciousness becomes tighter, opportunities to view what remains of his outdoor stencils are becoming increasingly rare. Visitors to the United Kingdom seeking to see his graffiti may find themselves wondering what works are left, and where they can be seen.

Luckily for them, the people at Time Out magazine in the U.K. put together a user friendly infographic with all of the coordinates of his remaining street art works. You can see the article here.