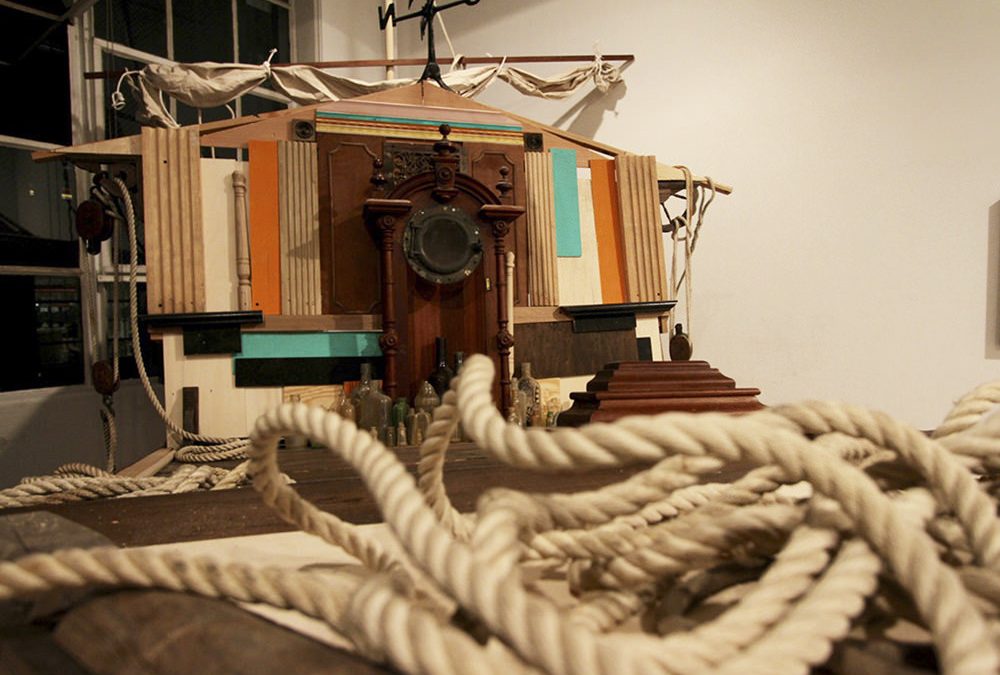 Have you ever noticed how everything goes quiet before a storm- the air seems still and calm, when suddenly a line of ominous clouds appear? It’s an intriguing phenomenon that people have recognized for centuries, and the inspiration behind Beau Stanton and Logan Hicks’s exhibition, “Calm Before the Storm”. Their show, which opened last Friday at New York City’s Highline Loft, borrows from nautical stories, both true and mythical, and themes in classical painting. An assemblage of myth and legends on water and water creatures have regularly appeared in Beau Stanton’s work. Previously featured on our blog, Stanton calls the style of his mandala-like pieces “Ornamental Realism”, a reference to his obsession with patterns. His new works cite famous stories like Moby-Dick and the Bronzes of Riace statues, famously found in the ocean off southern Italy in 1972. Stanton imagines their emergence from the sea with decorative imagery, brought to life by an installation of a fully reconstructed ship. Logan Hicks, featured in our current issue, mirrors Stanton’s decorative qualities in his ornately stenciled works. His stencils evoke a dark mood with underlying religious allegory, as we saw in his exhibit earlier this month, inspired by the Paris Catacombs. This includes a reinterpretation of Paul Delaroche ‘s The Execution of Lady Jane Grey, which portrays the moments preceding her gruesome death. The piece represents Hicks’s overall theme behind his new work, which takes a look at the mysterious cause of fate and our inability to control it.