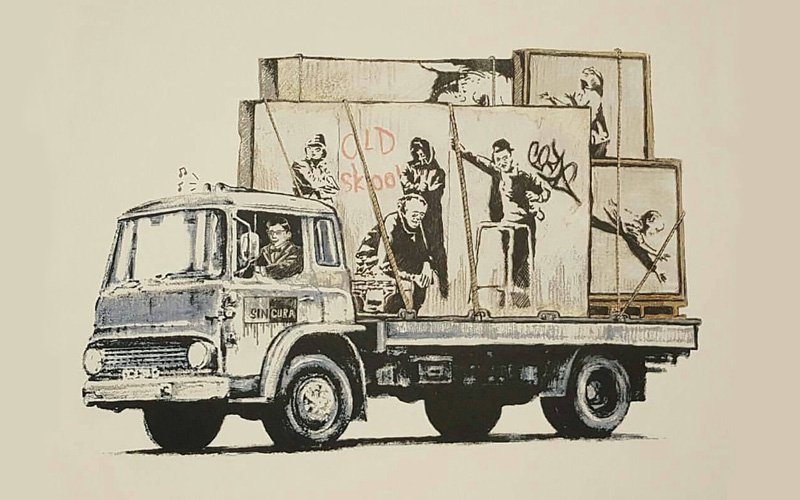 Banksy (you know, the most influential street artist ever) has been subverting the status quo since the ’90s with murals, exhibitions, an Oscar-nominated documentary, and blue-chip artworks, including—and pay attention to this last one—a 2006 set of screen prints that he created with legendary L.A. studio Modern Multiples. That was the last time the printmakers at Modern Multiples interacted with the British artist. Unless it wasn’t.

In March, an artist who calls himself Gonefellow produced a print edition with Modern Multiples (seen above). He released the artwork in September through Castle Gallery in Northern Ireland. The £190 ($230ish) prints featured a reworked Banksy drawing, and rumors began to circulate—could this be a secret Banksy work?

“The whole Gonefellow thing—a lot of people have taken notice of it on an international level,” says John Tallacksen, assistant printer at Modern Multiples. “I would still categorize it”—the interest in Gonefellow, he means—“as a bit of a cult following, but you can tell people are thinking something collectively. You can almost feel that people are wondering, is this Banksy under a different alias? I can’t speak to that. I’m not at liberty to say anything about that.”

So, is this print a Banksy? If you’re just here to get the answer to that question, I’ll save you four minutes of moderately interesting reading and tell you upfront: probably not. You’re free to go.

But if you’re in this for the gritty, speculative details, stick around. Like any good theory, this one has enough evidence backing it up to be plausible, if not completely convincing. Besides, if we’re honest, being convinced isn’t even the point. Most of us know that Paul is alive and Tupac is dead, but we love the conspiracy theories because, like religion, they grasp at a reality beyond the one we exist in. We want to suspend our disbelief, if just for a moment, and experience a world of possibility—a world in which aliens have contacted Earth and Banksy is secretly selling art for cheap right under our noses. In the latter case, that’s actually something Banksy has done before (I’ll get to that in a sec), so your disbelief shouldn’t be all that difficult to suspend, if just for the time it takes to read this article. Here, for the casual theorist, are the facts:

1. The print riffs off a Banksy image

Gonefellow’s print is a parody of Banksy’s “meat truck” illustration—itself a painting of his roving installation “Sirens of the Lambs”—which depicts a drab cattle car hauling a load of plush animals to the slaughter.

Gonefellow’s version, entitled Graffiti Truck … The Parodyborrows Banksy’s truck, but instead of animals, it’s loaded with Banksy murals that have been removed from the walls on which they were painted. A man in a suit sits in the cab, and the word “Sincura” is emblazoned the door.

The image decries the removal and sale of Banksy street art, for which the Sincura Group, a luxury concierge company, is especially infamous.

In 2012 the group acquired Banksy’s Slave Labor mural after it was chainsawed out of a wall, and they sold it for over £750,000. They’ve also removed No Ball Games and Girl with the Red Balloon (the latter of which sold for £500,000), and in September they “salvaged” Banksy’s Love Plane from a Liverpool building due for renovation. As explained on their website, their work is “controversial in subject [but] both ethically and morally sound and our sales have benefited local charities and ensured the longevity of artwork.” (Street art fans have voiced their doubt about the charity part.) The group is currently working on assembling all of Banksy’s Liverpool works under one roof.

The Gonefellow print borrows Banksy iconography to condemn the Sincura Group’s actions as antithetical to the ethos of street art. Banksy himself made clear that a 2014 exhibition Sincura claimed was “the most expensive collection of Banksy artworks ever” was organized without his involvement or consent.

2. Modern Multiples was the studio Banksy used when he came to L.A.

Banksy worked with Modern Multiples in 2006. The studio’s founder, Richard Duardo—who worked with the likes of Chaz Bojórquez, David Hockney, and John Van Hamersveld—was introduced to Banksy through Shepard Fairey and went on to print six editions for his Barely Legal show, which features prominently in the documentary Exit Through the Gift Shop. (Duardo passed away in 2014, and his sister Lisa is now the studio’s director.)

“The choice of Modern Multiples was kind of a no-brainer for two reasons,” says Castle Gallery owner Andy Lyttle, who handled the print release for Gonefellow. “One was obviously a connection of the image with Banksy, and Banksy used Modern Multiples for the L.A. prints. But also, their quality is second to none.”

In fact, it’s something of an obsession for Lyttle. In the back of the gallery he has a semi-secret room devoted to off-market Banksy works—it’s dark (you have to use a flashlight), the floor is covered in gravel, and the prints are hung between broken windows, a beat up sofa, and an old Tesco cart.

“What I do is 99 percent Banksy; that’s what I live, breathe, eat, and sleep and have done for a long time,” Lyttle says. “I couldn’t turn the Gonefellow image down because I’m a big Banksy fan, and it has got a fairly strong message, considering so many street pieces get removed, really as soon as they go up.”

Lyttle says he’ll be working closely with Gonefellow from here on out, and he’s revamping his website to feature Gonefellow’s art prominently alongside Banksy’s.

4. The print release was strangely successful for an artist no one has heard of

All 75 prints quickly sold out to buyers around the world—“they literally could have sold out multiple times,” Lyttle says—which is impressive considering there is zero information about Gonefellow out there. He has a barely-used Instagram, an empty Twitter, and an abandoned account on the online forum Urban Art Association. That’s it.

“On the Internet world, he just doesn’t exist at all,” Lyttle says. “Trust me, I’ve searched. Honestly, I don’t even know his name. I’ve never asked it. It sounds ridiculous, considering that we’ve done a print release, but I’ve always just called him G.”

Graffiti Truck is Gonefellow’s first ever print release—and yet here it is being bought and sold like a work by an established artist.

“Some people seem to say the name Gonefellow as if you’re supposed to know who that is, and then if you Google Gonefellow, you really can’t find anything,” Tallacksen says. “It’s really bizarre, and I think that’s what gets people thinking, ‘How am I supposed to know who that is, and why is this gallery in Northern Ireland making a big deal about this print release if he’s nobody?’”

“He’s not someone that has just started drawing pictures, which I suppose raises questions,” Lyttle says.

5. By adopting another alias, Banksy could preserve the value of his art, while also producing something accessible

Banksy’s identity is essentially out in the open now that scientists have used their science to reveal he’s almost certainly a man named Robin Gunningham. That revelation could be concerning for collectors.

“Anyone that’s bought into Banksy’s work is worried,” says Tallacksen. “What does that do to the value? As long as he doesn’t come out with any more prints, the value stays, which is astronomical. If it comes out that he’s going to continue making prints, the value could drop.”

Working under an alias could be a calculated move by Banksy, Tallacksen says, to preserve the value of his current print editions. Doing so would also make his work vastly more accessible—i.e. affordable to the average Banksy fan.

It wouldn’t be entirely out of character for Banksy to do something like this. A couple years back he pulled a stunt in NYC, where he hired a man to peddle Banksy paintings from a sidewalk stall for $60 a pop, selling only seven prints (The Guardian estimated them to be worth a combined total of $225,000). The Gonefellow print could be Banksy’s attempt to sell artwork to fans without all the art market insanity. And the work itself is about the increasing inaccessibility of Banksy works.

“The truth of the matter is,” says Lyttle. “Banksys have kind of got to that level where a big percentage of people can’t afford them, so anyone that enjoys Banksy work will appreciate that kind of message that Gonefellow was getting across.”

6. This isn’t the first time the theory that Gonefellow is Banksy has surfaced

The idea that Gonefellow could be Banksy has actually been floated before, on the forum Urban Art Association. Gonefellow was formerly an active member of the forum (even participating in the group’s 2014 secret Santa), and it was there that he debuted a version of the Graffiti Truck image to some fanfare in September 2014, posting low-res versions of the image to print for free.

In August of that year, user @andy3636 wrote to Gonefellow regarding a project, adding “If you’re actually Banksy lurking make sure you sign the bloody thing.” When Gonefellow disappeared from the forum sometime last year, commenters noted his loss. “Sadly, Gonefellow is living up to his name,” user @Dr.Plip wrote, to which @castlegalleryni responded, “That’s a shame i liked him, i think he was banksy.” (That’s right, @castlegalleryni aka Andy Lyttle—the gallery owner who is now promoting Gonefellow’s work.) @Dr.Plip wrote back: “I too think he was Banksy. One of them at least…”

There you have it. Is the evidence enough to outweigh the fact that this whole thing seems a bit low-profile for Banksy? Not quite. But then, maybe that’s the point?  Maybe this really is a semi-elaborate scheme on the part of Banksy to reinvent himself outside of the art world spectacle—to sell art to directly to his true fans and sympathizers. Or maybe, as that last @Dr.Plip comment suggests, Banksy is a collective, of which Robin Gunningham and/or Gonefellow and/or Massive Attack frontman Robert Del Naja (a theory for another time) and others are all a part, and this print is just one member’s side project.

That seems unlikely. From my conversations with Lyttle, Tallacksen, and Lisa Duardo, it was clear none of them believed they were truly working with Banksy. When I put the question directly to Lyttle—is Gonefellow Banksy?—he answered, “I don’t know Banksy, and I don’t know who Gonefellow is, but the guess would be no”—a conclusion he drew from context clues in his conversations with the artist. And as for his comments on Urban Art Association: “I was really joking about it at that stage,” Lyttle says. Though, before then, he did have his suspicions. “I suppose at one point that I did believe to a degree, but I don’t now,” he says. “I don’t know why, but I just don’t.”

Gonefellow: probably not Banksy. But you knew that coming into this, and here you are anyway.