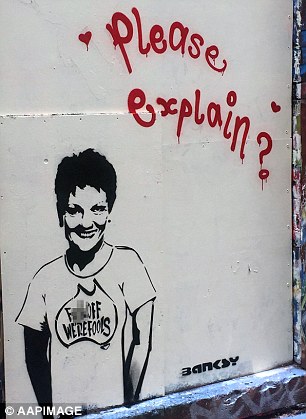 A woman claims to have caught the elusive graffiti artist Banksy on camera in Melbourne.

Shaky mobile phone footage shows the woman, called Mia, approaching a man down a dark alleyway as he sprays paint on a wall.

The mysterious figure puts his hood up and walks away as the woman approaches the wall, where she finds graffiti depicting anti-immigration politician Pauline Hanson next to what she claims is Banksy’s signature.

In the video, the woman races after the man, who turns and tries to block the camera with his hand, shouting ‘f*** off, f*** off’, before escaping down the alley.

It is not known if the footage is genuine, or if the graffiti is a Banksy.

The artist does not stencil his signature on all of his work and the signature in the video is not the same as one he has used in the past.

The latest claimed sighting of the Bristolian artist was made on Melbourne’s Hozier Lane, which is known for its street art.

The graffiti – a caricature of Hanson under her trademark ‘please explain?’ phrase – was found on the wall next to a signature reading ‘Banksy’.

Hanson has caused outrage in recent weeks by calling for a halt on all Muslim immigration to Australia, although a poll found that around half of people backed her proposal.

Although no one has confirmed Banksy’s identity, a Mail on Sunday investigation in 2008 is believed to have unmasked him as former public schoolboy Robin Gunningham.

Representatives for the secretive artist denied it was him back then, but researchers in London later backed the theory after using ‘geographic profiling’ to track his movements.

Banksy’s works, which can be found in cities across the globe, sell for up to $1.5M and are collected by a raft of celebrities, including Brad Pitt and Angelina Jolie.