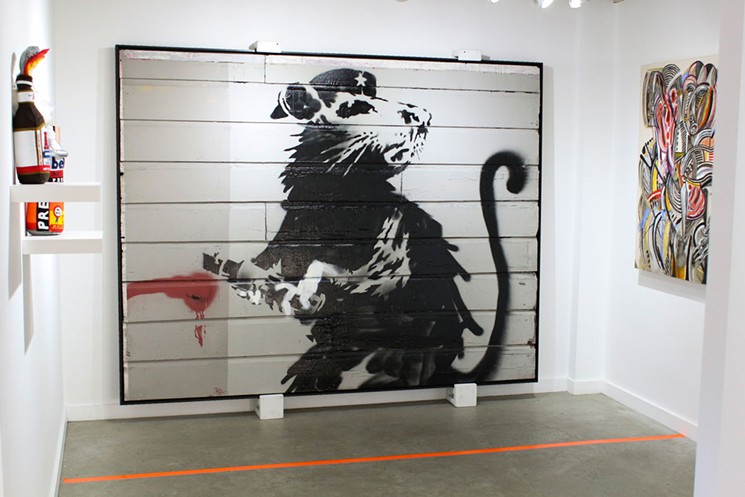 Graffiti began as a way for young people to leave their mark on dilapidated buildings and worn-out subway cars, a futile attempt to beautify their ugly surroundings that has now been completely absorbed into the mainstream. Artists Republic Gallery—with the assistance of Elephants and Castles and Hexagon Gallery—has curated a small, substantial exhibition to celebrate that street art. A backhanded reference to Laguna Beach’s “Pageant of the Masters,” “Pageant of the Vandals” includes work by Banksy and others, including local hero Jeff Gillette, whose confrontational paintings of Disneyfied slums inspired Banksy’s Dismaland “bemusement park” last year.

The shiny jewel of the show is Banksy’s Haight Street Rat from art philanthropist Brian Greif, who bought the beret-wearing rodent that had been stenciled and spray painted onto the side of a San Francisco building. Greif rescued the work before it could be tagged or painted over; it now tours free around the country. It’s a beautiful piece, the large, black rat outline holding a can of spray paint, a last red blob dripping near the nozzle in his hand. Although it’s only part of the piece—there’s text and another character that wasn’t saved—it’s still impressive, and it’s a joy any time you can see such work up close. Banksy’s social criticism generally targets repressive conservative forces, but he’s also wholly fearless when it comes to wagging a finger at the market purchasing his work. One in the series of pricey prints along one of the gallery’s walls features a line of hippies and punks standing at a sales booth, buying red “Destroy Capitalism” shirts.

Gillette’s wrecked Disney billboard planted in a black-and-white wasteland, juxtaposing images of a mangled Sleeping Beauty Castle and Hiroshima’s ruined Genbaku Dome in the background, is similar enough to other paintings that it feels like a bit of a rehash. What’s different, however, are the small sculptures he’s included: a shantytown made from scrap wood, each with cartoon characters on the porch or poking a head out a window. The patchwork surfaces and rusty corrugated metal roofs held down by minuscule old tires and minute bricks are lovely, obsessive things, with the characters from our childhood seen in such a context deeply poignant.

Lucy Sparrow’s work has the same irreverence of Banksy and Gillette, with an undercurrent of menace: I have no idea when it was actually made, but it’s an emotional experience seeing her rainbow-hued, felt AK-47. Following the recent mass killings in an Orlando gay nightclub, the melding of the colors and the idea of the gun as an adult plaything wipe whatever smile it created right off your face.

South African graffiti artist Jack Fox is used to working on larger surfaces, but his ink-on-paper pieces are nightmarish horror vacui tales that resemble dense woodcuts. Condensed to the size of an 8-by-10, the series appears to be about a man and a dog (d)evolving into a gory hybrid. By the fourth piece, we’ve been inundated with vivid black-and-white images of spurting oil, gouts of blood, ethereal masked creatures, weathered faces and poisoned atmospheres, with its final image the man disappearing into the beast. For U.K. artist Ellannah Sadkin’s color-drenched cartoon portraits, the artist takes well-known characters and paints their psyches: Alice’s face is a white empty space, the monstrous dandelions of Wonderland lurking in her hair like a spinster’s dogs that have discovered their dead master is now food.

Beau Stanton’s meticulous paintings are riveting, full of water and nautical themes, the steampunk influence highly observed—sea water sucks a Greek bust under its surface, as the rays of a Japanese sun explode in the background; a man in a diving helmet paddles a submarine with a bicycle—and while the pictures have no obvious narrative, their dreamy graphics take you someplace familiar. The text on Ben Eine’s four canvases are smaller versions of the larger murals he does, but their tired irony pales when compared to the other work present, including his boisterous anti-CCTV piece in the storefront window. Zio Ziegler, best known in OC for his astonishing mural on the Tilly’s building off the 405 freeway, is represented by a canvas that feels like warmed-over Picasso, more ode than inspiration. Chad Hasegawa’s two geometric canvases are a neat contrast to his better known street work: Minus the ferocity of his bear canvases/murals, these paintings are less chaotic and easier on the eyes, their lines and subdued colors calming visual sedatives.

Kudos to the gallery for its handful of pieces from local graffiti artists Brainfarts. I appreciated the old-school appropriation of Frank Frazetta’s Mad Max movie poster: They’ve put a can of spray paint in his hand, tagged the freeway red at his feet and changed the visored face in the original to that of a monkey, then titled the print Manksy. It’s mocking, shovel-ready art perfect for any progressive home, and they bring the show full-circle. Prints of the piece are an inexpensive $10 and celebrate the roots of the pioneering artists around it, minus their substantial price tags.