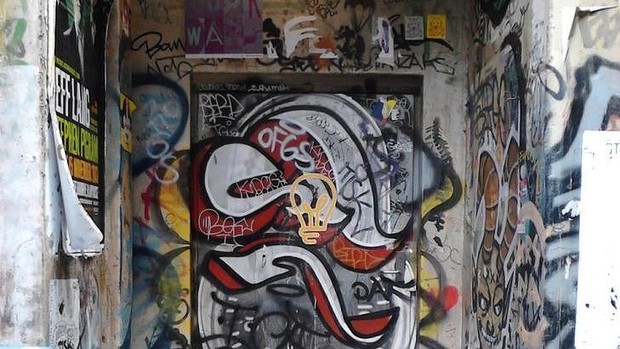 A Melbourne historian who raised the alarm about the destruction of street art by renowned British street artist Banksy during construction works in a city laneway has called for the artists’ two remaining Melbourne pieces to be preserved.

Three stencils created by Banksy in 2003 in AC/DC Lane were damaged during work to expand a doorway connected to a new business.

Meyer Eidelso, whose company runs history and street art tours, said the rubble containing the works had been dumped into a skip.

Mr Eidelson, who last week revealed the damage to the rat stencils, says he thinks the whole wall should be preserved and possibly displayed in the National Gallery of Victoria.

The recent damage is the latest in a series of mishaps that have destroyed a number of works by the elusive street artist, who painted stencils in city laneways when he visited Melbourne in 2003.

“There are another two Banksys in that lane, they are the best Banksys left in Australia,” Mr Eidelson says. “Obviously that’s an absolute [attraction], three local Banksys.

“In 2003 when Banksy visited, that was a seminal moment in street art,” he says, that was influential for a number of Australian artists.

“The whole wall should have been put in the NGV.”

Mr Eidelson says the works should be protected in the same way as heritage sites and streetscapes.

“Some things go beyond ephemera, its part of the national [culture]. They should be walled up, sealed off or removed to the NGV.

“Despite the whole ideological thing about graffiti, this is different. In 20-30 years time people will look back and say ‘This is where it began’.”

Mr Eidelson questioned why the works were not protected before the building work began. “With these Banksys, they could have been preserved … To me, this is about history, not just about the individual works … Why aren’t laneways assessed before development happens?”

A City of Melbourne spokesman said the planning permit it issued to Aphros Pty Ltd allowed for “partial demolition, alterations and additions and the erection and display of internally illuminated business identification signs.

Asked whether the significance of street art was considered, the spokesman said it was not a factor in such decisions.

“While a planning approval and/or building approval may be required for certain buildings and works, graffiti and street art has no legislated protection.

“Consequently, property owners are not required to consider the effect on graffiti/street art when they carry out work on their buildings.

“The City of Melbourne’s Graffiti Management Plan notes that street art is by its nature temporary, ephemeral and forever changing.”

He said the council had no plans to preserve the remaining Banksy works in the laneway.

There are precedents for protecting street art and displaying works in public galleries: the original door from the Collingwood mural painted by US street artist Keith Haring in the 1980s now hangs in the NGV. It had been stolen from the site but was later returned to Arts Victoria. The National Gallery of Australian in Canberra also has a substantial collection of Australian street art.

Geoff Newton, a Melbourne gallerist who also values cultural gifts (items of significance donated from private collections to public institutions) said there were several arguments about whether street art should be protected.

“The Haring [mural] was tricky because there were so many people involved, so you had curators … who had the viewpoint that graffiti is supposed to be painted up and painted over,” says Newton.

“The other [argument] is that things should be preserved by museum standards.

“I think Banksy sits in a strange position, because his bankability and market worth has superceded anything, to my mind, classed as fine art or contemporary art …

“If you start saving [works by] Banksy, then you’d have to save [pieces by] people like Haha [Regan Tamanui, creator of the ubiquitous Ned Kelly stencil] which is in the NGA collection.”

Asked if it would consider adding the Banksy works to its collection if they were removed from the laneway and preserved, an NGV spokeswoman said the gallery had no comment at this stage.