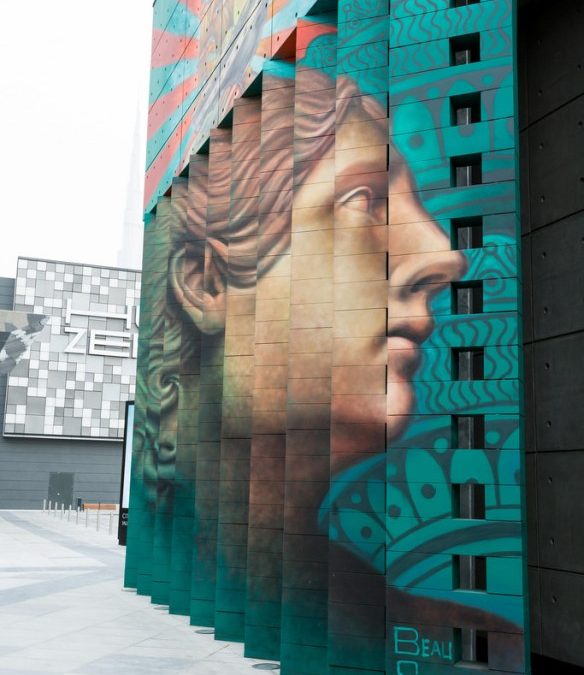 Brooklyn based painter Beau Stanton has honed his artistic talent over the years with his mural works, adapting the techniques of his mandala-like nautical inspired paintings to his large scale mural works. Although he has painted in some of the most undoubtedly interesting places around the world, from the Berlin wall to the 12th century Crypt of Saint John the Baptist, featured here, his most recent mural presented a particularly unique challenge.

Stanton’s new mural at City Walk in Dubai is lenticular – which means that the image appears to change or move as the wall is viewed from different angles. When the artist first told us about the mural, he admitted that the nature of the building, which is not an entirely flat surface and extrudes outwards, posed an interesting problem that lent itself well to creating “three murals in one”:

The face of a man appears on one side, a woman on the other, in the style of Stanton’s earlier works inspired by the Bronzes of Riace statues. Above them, a ship sails triumphantly along the horizon. The piece reflects Stanton’s creative ideal of using ornaments, symbols and icons to represent different places, people and times that come together in his pattern-making that he calls “Ornamental Realism.”

Painted for Dubai Walls, Stanton’s piece joins other notable artists like AIKO, EINE, D*FACE, and The London Police, in an initiative to introduce street art to the Middle East. In its inaugural project in March 2016, Dubai Walls invited 15 renowned street artists with the goal to create the conversation about street art, now globally recognized art form, and introduce it to residents and visitors in the region.