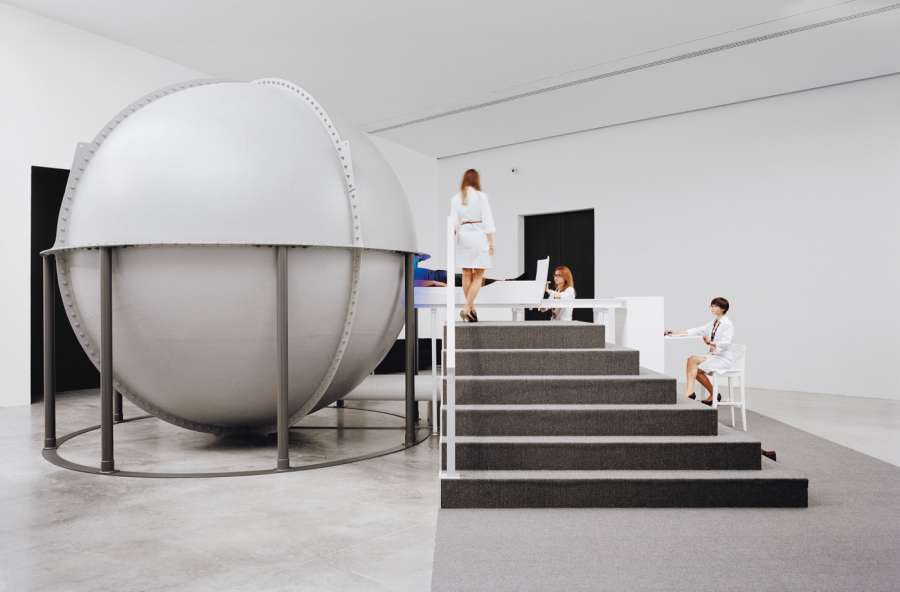 The Los Angeles County Museum of Art takes a special interest in the Light and Space art movement of the 1960s and 1970s. Its reasons aren’t surprising: the U.S. aerospace industry, which boomed throughout southern California during this time period, produced a plethora of new materials for their endeavors, which curious local artists experimented with. Encouraged by their ingenuity, the County Museum (LACMA) launched an Art and Technology Program (1967-71), which provided artists from this new movement with studio space and material resources to nurture their creative discoveries. One of the artists who participated in the program was a young man from Pasadena named James Turrell, who was interested in the psychological effects of light.

Following a large retrospective of Turrell’s work in 2013 and 2014, LACMA acquired two immersive pieces for their permanent collection. One of these, Ganzfeld (Breathing Light), is a carefully constructed room which bends light in slow transitions of solid color. Multiple people can enter the room at one time, and viewers serve as real distance markers. The space around them appears to distort depth perception when the light moves across the rounded walls.

The other piece is quite possibly the most coveted solitary confinement space in California. Called Light Reignfall, the spherical steel and fiberglass chamber is one of Turrell’s famed Perceptual Cells (there are less than 10, in various shapes). The Cells, according to the artist’s website, are ‘enclosed, autonomous spaces built specifically for one person at a time, in which one’s perception of space is challenged by light.’

Light Reignfall was LACMA’s hot ticket when the piece went on view for a year (May 29, 2016 – May 29, 2017). Admitting a single person at a time, tickets sold out months in advance. Hexagon Gallery visited a few months before the exhibition ended, and were the first participants of that day.

We arrived to the room reserved for the Cell in LACMA’s Lynda and Stewart Resnick Exhbitition Pavilion. Two young women dressed in crisp white lab coats greeted us and handed us medical release forms to fill out, citing the effects of strobing light. We were then asked if we preferred hard or soft strobing. Having been to a rave environment once or twice (who’s counting?) in our youth, we felt confident that we could handle hard strobing. One of the women pressed a button on a control panel, and a low bench slid out slowly and neatly from the white-painted steel globe in an uncanny resemblance to MRI machines. We climbed up a low set of stairs to the machine, lay down on the bench, and our ‘lab technician’ placed headphones around our ears and a panic button in our hand. She pressed another button, causing the bench to slide back into the chamber until the door was sealed, and our eleven minutes of ecstasy began.

Inside the chamber, soft blue lights began to pulse slowly, getting infinitesimally brighter each time. They were eventually joined by sherbet-colored orange and pink spots, which blended mid-air and produced a range of tertiary colors which spilled across the only semi-flat surface (us). As softly pulsing white noise filled our headphones, the bokeh effect was replaced by persistent bursts of phosphorescent color, and the lights formed a variety of grid-like patterns. The light pulses and the sound pulses grew louder and louder, and we suddenly realized that we had entirely lost the sight — and the feeling — of our surroundings.

Tentatively, we stretched out one hand in front of us, just to make sure we actually still existed, and then watched the hand at length, dazed at the way the lights re-shaped it as we wiggled our fingers. A crazy thought occurred to us: is this real, or did the lab coat ladies simply administer a quick-acting psychoactive substance and lock us in an empty gallery?

The effect of the lights and sound was trancelike. Absorbed in this sublime state, we were on the verge of giving up our last pretense of corporeality and becoming one with the patterns.

Then, the lights and sound slowed down, softened, and finally faded out, reminding us that time and place were once again at work. A sliver of light appeared near our feet, and a door slowly opened. Our bed moved smoothly out into the greater gallery, and one of the lab technicians, looking equal parts amused and bored, helped us off of the machine. Our knees wobbled as we descended the stairs back into the gallery space.

Seph Rodney, a critic for the art blog Hyperallergic, sums up the experience brilliantly:

“This is the small astonishment of Light Reignfall: that through a combination of light and sound, for a few moments at least, the work can strip you of all the typical assurances of selfhood, of what I think make me my own special person, and in that moment I suppose I glimpsed something that felt almost infinite — the totality of our collective experience as the human species of which I am and will always be a small part.”