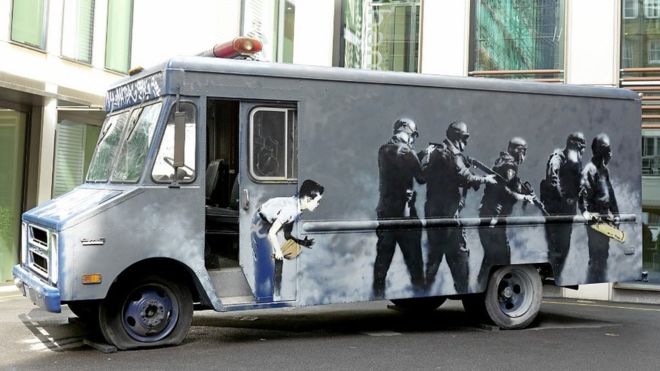 A SWAT van spray painted by street artist Banksy has fetched more then £218,000 at auction.

Created in 2006, the work depicts a group of armed officers about to be tricked by a boy on one side and Dorothy from The Wizard of Oz on the other.

The “imposing object” has remained unseen since its only showing at Banksy’s debut US exhibition.

Described by the auctioneers as “one of his most important and arresting pieces”, the “household gloss and spray paint on van” was sold along with a certificate of authenticity.

A spokesman for Bonhams, said the work had been “acquired directly from the artist” by the vendor after it appeared as the “centrepiece” in Banksy’s debut solo exhibition in America.

“It was shown for the first – and only time – in an industrial warehouse in downtown Los Angeles,” he said.

He added that Banksy’s stencilling technique had been “artfully employed” on the SWAT van.

“His characteristic stencilling technique was inspired by an incident in which the artist was hiding from the police under a rubbish lorry, he noticed the stencilled serial number,” he said.

“Stencilling has since allowed him to carry out complicated graffiti pieces extremely quickly, before he melts away into the night.”