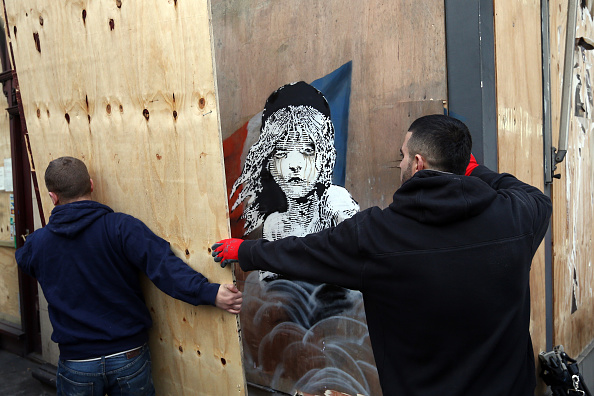 A mere two days after appearing on a construction site opposite the French embassy in London’s upscale neighborhood of Knightsbridge, Banksy’s latest artwork has been covered up.

The mural—which criticizes French police’s use of teargas on refugees—depicts a tearful young girl inspired by the musical Les Misérables and a leaking canister of CS gas engulfing her from below. A QR code beside the work links to a video of French riot police forcefully evicting migrants from the “Jungle” refugee camp in Calais, northern France.

French police have been accused of using tear gas, rubber bullets, and concussion grenades—accusations which officials in France have denied.

According to AFP, by Monday morning construction workers were already using crowbars in an attempt to remove the wooden board on which the artwork was painted. The workers later covered the painting, using drills to attach another wooden board over the work.

The property developer reportedly said the measures were being put into place to protect the artwork from getting stolen after police were called to the area on Sunday night. A gang of men reportedly tried to forcibly remove the work, damaging the sides of the plywood board. According to a police spokesman, the gang had fled before officers arrived.

Mike Sadler, director of Cheval Property Management ltd., told the BBC the company was “discussing future plans for the artwork.”

Original examples of Banksy’s work can fetch six-figure sums. The latest work is especially valuable (and vulnerable) as it appeared on the artist’swebsite, confirming its authenticity.

In April 2014, a Banksy mural known as Mobile Lovers (2014) appeared on a doorway in Bristol, England near a Boys’ Club which quickly removed it using crowbars. It was later sold to an anonymous buyer for $670,000.

A year later, in April 2015, a Palestinian man was duped into selling a Banksy mural painted on the door of his family’s destroyed home for $175 to a man who falsely claimed to represent the artist.