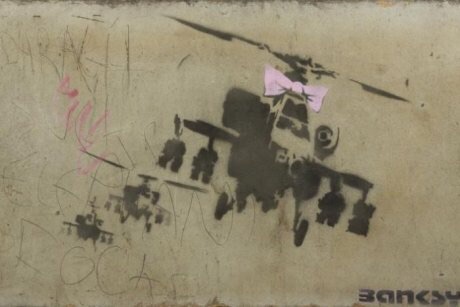 A collection of works by elusive British graffiti artist Banksy left on walls, screen prints and other unorthodox means is expected to sell for more than $500,000 when it goes up for auction in southern California next month.

The top lot at Julien’s Street and Contemporary Art Auction is Banksy’s 2002 work Happy Choppers, an original aerosol stencil of military helicopters decked out with a pink bow created in central London, that is expected to sell for about $150,000.

The artist’s Boy Painting Pink Heart, featuring a boy painting a heart on the wall of a London house in 2005, is expected to fetch up to $120,000.

Other Banksy works include Nola, a 2009 Hurricane Katrina image of a girl holding an umbrella with rain falling inside of it, and Bomb Love and Crazy Horse Car Door from an installation he created during his spell in New York in 2013.

The highest price for a work of art by Banksy was struck in 2008 when Keep It Spotless was sold for $1.8 million at Sotheby’s in New York.

The auction will take place at Julien’s Auctions in West Hollywood on April 29, and will also include works by Shepard Fairey, Damien Hirst, Jeff Koons and Andy Warhol.