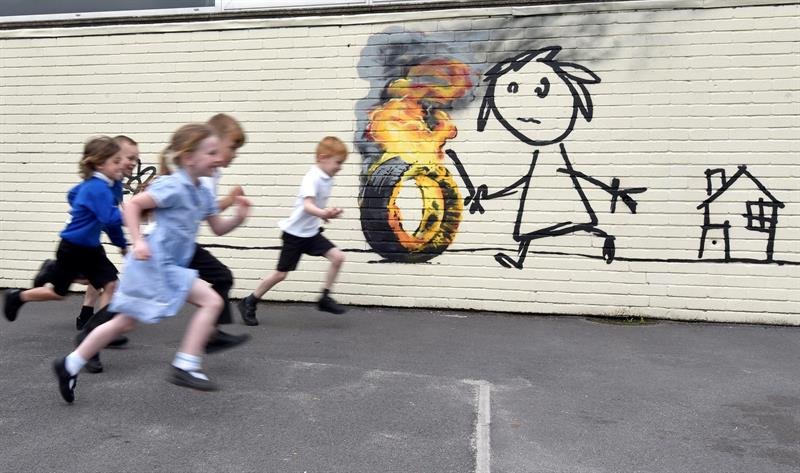 The street artist Banksy has painted a primary school playground wall and left a note that could cause havoc with the school’s code of discipline – “remember it’s always easier to get forgiveness than permission” – in gratitude for the honour of having one of the houses of the school in Bristol named after him.

The painting, of a scribbly school girl bowling an alarmingly realistic burning tyre along the 14ft wall, and the note left for the school caretaker, appeared overnight at Bridge Farm primary school, in the city where the anonymous artist’s meteoric career began.

Pest Control, his agents who authenticate his work, promptly confirmed to the Guardian that the work is genuine – despite their warning “because many Banksy pieces are created in an advanced state of intoxication the authentication process can be lengthy and challenging” – and that the school has framed the note. Unusually the mural includes a signature, but in the tricky world of real and fakeBanksy, that is no guarantee of authenticity.

The pupils had written to Banksy before Easter, telling him that they had voted to rename one of their four school houses in his honour. He is in good company: the others are Cabot, after the 15th-century Italian explorer John Cabot, who mounted three voyages of exploration from Bristol; Brunel after the engineerIsambard Kingdom Brunel, who slung the famous suspension bridge over the city’s Avon Gorge; and Blackbeard after the pirate said to have been born in Bristol.

Although many Banksy street pieces have been expensively peeled off their walls and dispatched to the auction room, to the anguish of local people who regarded them as gifts to their community, the school’s headteacher Geoff Mason has confirmed that they have no plans to sell it, and regard it as “inspirational and aspirational” for the pupils.

The theft and return of the celebrated street artist’s sculpture is treated like a major art heist in a film that riffs on Banksy’s Exit Through the Gift Shop.

He will not be allowing the pupils to act on the artist’s suggestion that if they do not like the picture, they can add to it. The note to the school read: “Dear Bridge Farm, thanks for your letter and naming a house after me. Please have a picture. If you don’t like it, feel free to add stuff – I’m sure the teachers wont mind. Remember – it’s always easier to get forgiveness than permission. With love, Banksy.”

The anonymous artist’s career began in Bristol, and his works now fetch huge prices at auction – Kissing Coppers, originally a mural in Brighton, sold in Miami for nearly $500,000 (£345,000) in 2014. Several of his early works have been preserved on walls in Bristol, and are thought to add enormously to the value of properties – one dilapidated pub with a Banksy sold for twice the original estimate.

Last summer, he invited a collection of anarchic artists to create a spoof fun fair, Dismaland, in a derelict lido in Weston-super-Mare – which had people queueing for up to four hours to take in jokes about security paranoia, state repression, immigration and capitalism. The desolate installation, with staff ordered to look as sullen and wretched as possible, is believed to have added millions to the local economy.