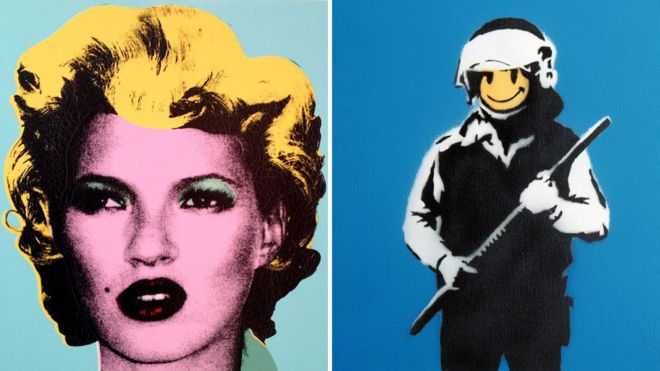 Artworks by street artist Banksy from international private collections are to go on display in Rome.

The exhibition, titled War, Capitalism & Liberty, will feature many paintings, prints and sculptures which have never been seen in public.

The exhibits include Banksy’s black and white stencilled sandwich board-wearing monkeys declaring: “Laugh now but one day we’ll be in charge.”

There is also a print of supermodel Kate Moss in the style of Andy Warhol.

The show, which is not authorised by Banksy, runs at the Palazzo Cipolla museum in the Italian capital from 24 May to 4 September.

Co-curator Acoris Andipa said: “This is the largest collection of work by the artist known as Banksy, a corpus of over 120 works including sculptures, stencils, and other artistic expressions, all strictly from private collectors and, therefore, absolutely not removed from the street.”

Stefano Antonelli, who also curated the exhibition said: “Since the 1990s, the artist known as Banksy has used public space to express and exhibit his work, freeing the potential of graffiti and laying down a new blueprint for street art.

“Advances in internet technologies and image-sharing platforms have consecrated him as an idol for a new generation which has given him a worldwide fame. In the history of Western art, no other artist has managed to bring themes of this magnitude to the attention of a global audience.”

The elusive Bristol-based artist made headlines last year with his Dismaland theme park in the UK.

The “bemusement park” at a derelict seaside lido in Weston-super-Mare attracted thousands of visitors when it opened in the summer.