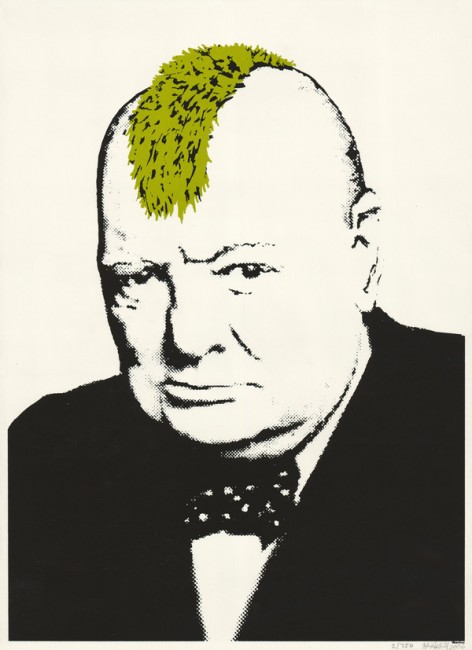 Banksy’s Turf War is an early and popular punk rock re-imagination of the historical British figure, Winston Churchill. Banksy created debuted the image in 2003 and released the artwork for sale in an edition of 750, with 150 signed prints and 600 unsigned prints. The artwork is named after the exhibition of the same name that Banksy organized in 2003, in London. Turf War was one of the earliest major solo shows for Banksy, and was controversial due to its containing painted animals, a vandalized police van, and several incendiary political images.

The stencil artwork Turf War depicts a likeness of Winston Churchill with his characteristic focused, ferocious gaze that earned him the moniker “The British Bulldog” during World War II. Banksy has given the famous figure a green mohawk, transforming him from a formidable politician into a punk rock dissident. The title of the artwork is a pun, as Churchill’s hair resembles grass, or rather, astro turf. Turf War is both clever and politicized, achieving significance in light of Churchill’s leadership during World War II.

If you would like to sell your Banksy art, Turf War is an early and highly provocative image that Banksy collectors are seeking to add to their collections. If you would like to buy Banksy’s Turf War, it is a classic and valuable example of one of Banksy’s clever and satiric sensibilities at an early juncture in his career, and carries with it the distinction of having come out of the legendary Turf Wars exhibition. Hexagon Gallery is the leader for Banksy art sales in the United States. To sell or buy Banksy art, please contact info@hexagongallery.com.