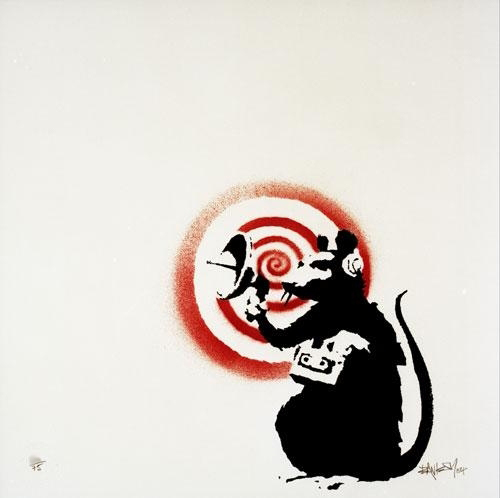 Rats are one of Banksy’s most prolific subjects, and Sonic Rat (Radar Rat) is a rare Banksy artwork. The screen print first appeared in 2004 with a limited edition of 75 signed pieces, all of which feature hand-stenciling on the radar portion. Banksy has reproduced variations of Sonic Rat as graffiti art in the streets, original paintings on canvas, and record label covers. Urban art lovers all over the world have imprinted the image on coffee mugs, t-shirts, posters, and their bodies. 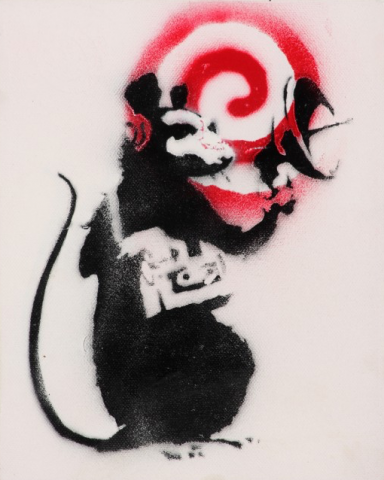 In addition to the print, Banksy’s Radar Rat has also been executed as a stenciled spray painting on canvas. This painting is from 2004.

Rats are iconic in Banksy street art prints because they are emblematic of street art itself. Banksy wrote this about rats in his 2005 book Wall and Piece: “They exist without permission. They are hated, hunted and persecuted. They live in quiet desperation amongst the filth. And yet they are capable of bringing entire civilizations to their knees.” Banksy rats reference the so-called father of stencil graffiti,” Blek Le Rat. This French stencil artist, who made his name in the 1980s, was similarly fond of rats as subjects because of their massive, if negatively perceived, impact on populations.

Banksy’s Sonic Rat (Radar Rat) is shown holding a tape recorder in one hand and a sonic radar in the other hand. He wears headphones and appears to be listening intently to the world around him that the bright red sonar rings are collecting. This shrewd rat is far from dopey; in fact, he is representative of the true nature of rats: intelligent, tenacious, and with an arguably unparalleled survival instinct.