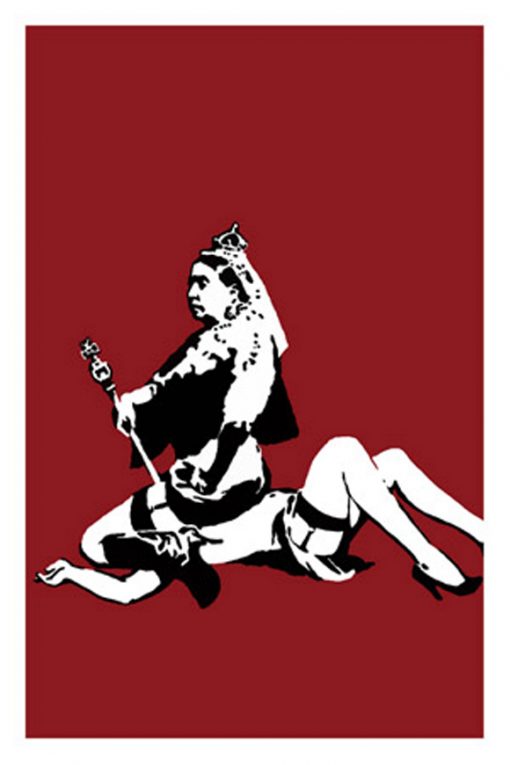 Queen Vic is an early Banksy artwork printed by Pictures On Walls in 2003. It was shown the same year in a group show in New York City at the Vanina Holasek Gallery. Queen Vic (or Queen Victoria) was created as a limited edition screen sprint with 500 unsigned works and just 50 signed prints. This irreverent stencil image depicts Queen Victoria, England’s monarch from 1837 until her death in 1901, as a lesbian engaged in an indecorous sexual act known as “queening”. Printed in black and white against a cherry red background, Victoria’s crown, hairstyle, cape, and blouse look like they could have been lifted from a period engraving. However, her skirt ends at her upper thigh, with her garters peeking out, and she wears knee-high heeled boots. She is sitting upon the face of another woman whose body is splayed on the ground. Victoria’s knees are spread apart; one hand is on her hip as she looks toward the the viewer, and in her other hand she is assertively holding her royal staff.

Banksy is well known for his criticism of government corruption. Queen Victoria allegedly stated publicly during her reign that “women cannot be gay,” and passed anti-gay laws to support her conviction. Banksy’s satirical image suggests that the British government, even under the reign of a monarch who captured the attention (and imitation from) the rest of the world, has historically been rife with hypocrisy.

If you would like to sell your Banksy art, Queen Vic is an early, highly provocative, and humorous image that is desirable for a great number of Banksy collectors. If you would like to buy Banksy’s Queen Vic, it is a statement piece. The signed works are rare and will climb high in value over the next decade. Hexagon Gallery is the leader for Banksy art sales in the United States. To sell or buy Banksy art, please contact info@hexagongallery.com.