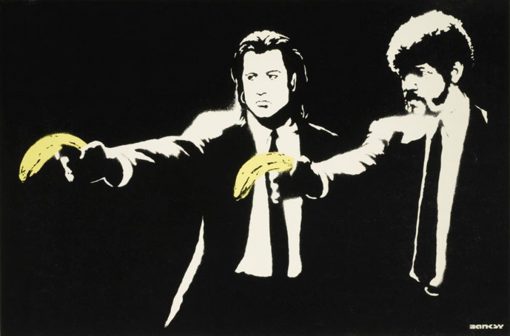 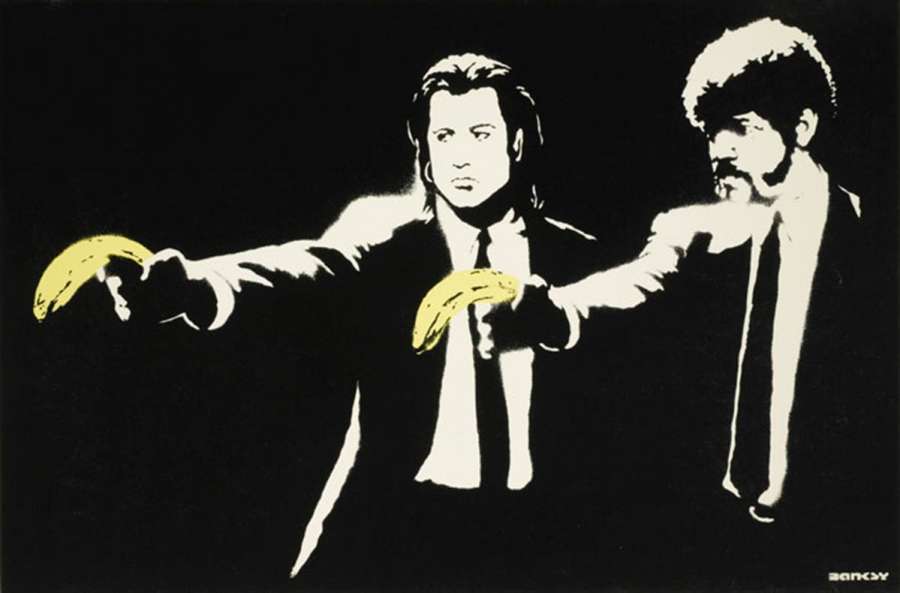 Banksy’s Pulp Fiction first appeared as an urban art piece on a wall in London’s Old Street neighborhood in 2002. The artist created a limited edition screen print of the work in 2004 with 150 signed pieces and 600 unsigned pieces. In 2007, Transport For London painted over the original street art piece, citing that it contributed to an image of the neighborhood as violent and decaying. Banksy actually tagged over their cover-up with a similar image temporarily, but the screen print that has become popular enough to be translated to stretched canvas, posters, t-shirt, mugs, and murals is of the original artwork.

Pulp Fiction is an homage to the main characters in the eponymous film, directed by Quentin Tarantino. The artwork, created on a black background with white stencil lines, shows the busts of protagonists Vincent and Jules side-by-side, ready to shoot their guns into some outrageous situation. Instead of pistols, however, they hold bright yellow bananas. Banksy’s artwork is known for its humor, and the campy violence in the film plot is rendered positively ridiculous with fruit as a weapon. 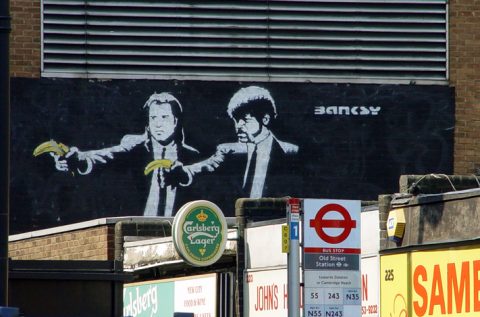 View of the original street installation of Banksy’s Pulp Fiction.

There are several pop culture references that Banksy could be appropriating. It is likely that Banksy is familiar with the iconic British comedy troupe Monty Python and the Flying Circus, who filmed a brilliant television skit in 1969 called “Self-Defense Against Fruit.” The episode parodies acts of pseudo-violence committed with bananas, apples, and oranges. Another source could be the iconic Andy Warhol-designed 1967 album cover for The Velvet Underground, featuring an oddly-sexualized half-unpeeled banana on a black background. A third derivative could be the association of bananas with monkeys, which are a reoccurring theme in Banksy’s artwork for sale and who symbolize cleverness disguised as dumb animalism.

It is almost funny to know that an artwork with such glorification of campy pop culture references was deemed to depict glorification of violence, but government agencies rarely have a broad sense of humor. Banksy actually re-tagged his street art piece in early 2007 where it had been covered by Transport London, this time showing the protagonists holding pistols — but wearing banana costumes. A young graffiti artist called Ozone wrote over the piece with the words, “If it’s better next time I’ll leave it.” Sadly, Ozone was hit and killed by a train just days afterward, and Banksy painted over Pulp Fiction (version 2) with a tribute to the deceased artist. “When we lost Ozone we lost a fearless graffiti writer and as it turns out a pretty perceptive art critic, ” Banksy remembered at the time.

If you would like to sell your Banksy art, both the signed and Pulp Fiction Banksy prints are great additions to any collection.  If you would like to buy Banksy’s Pulp Fiction, it is a wildly popular graffiti art print that is a coveted work to have in a Banksy collection because it is broadly meaningful and humorous. Hexagon Gallery is the leader for Banksy art sales in the United States. To sell or buy Banksy art, please contact info@hexagongallery.com.