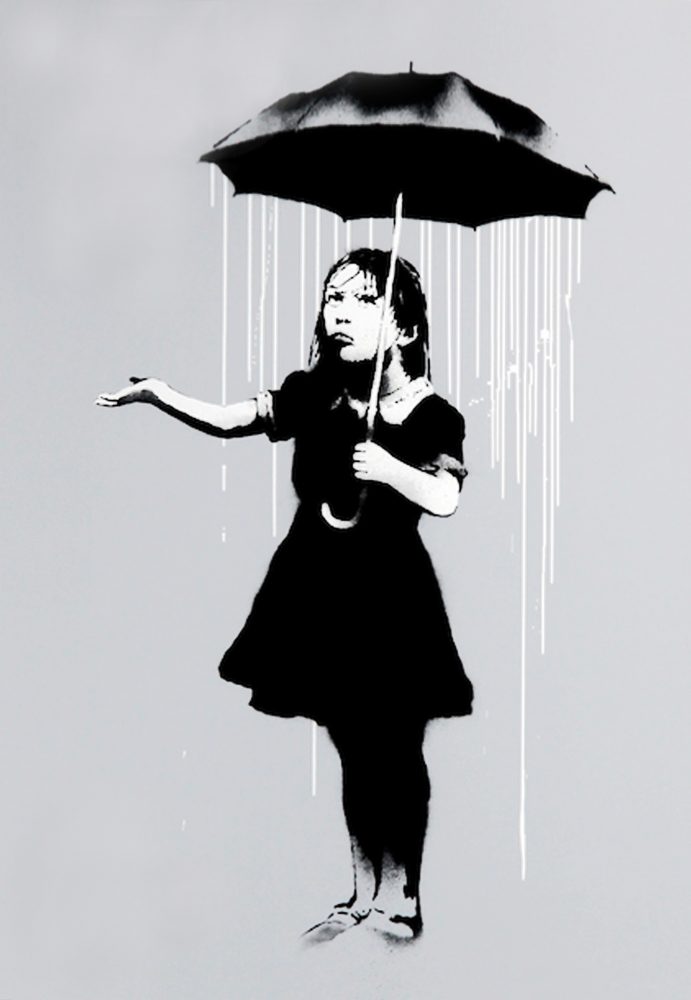 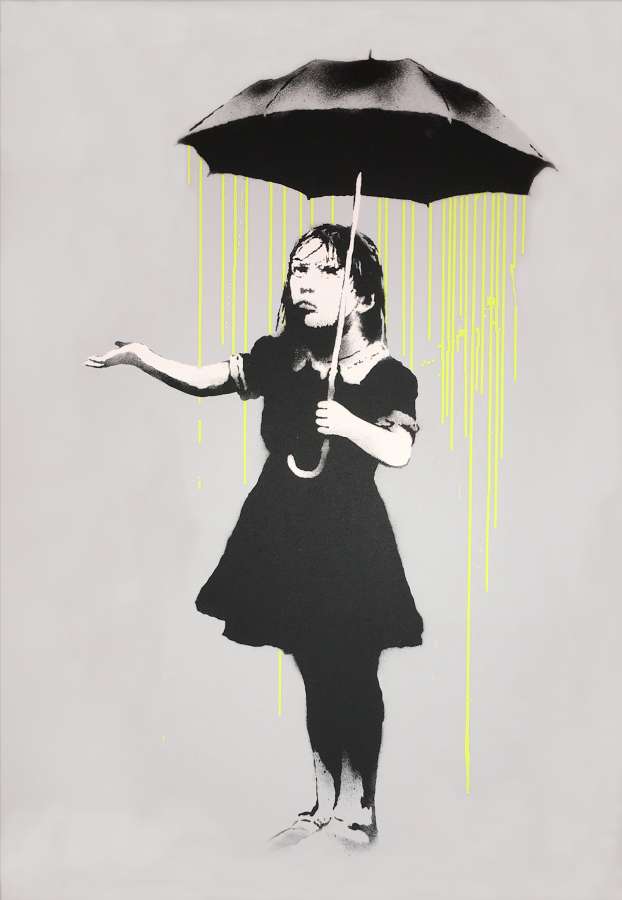 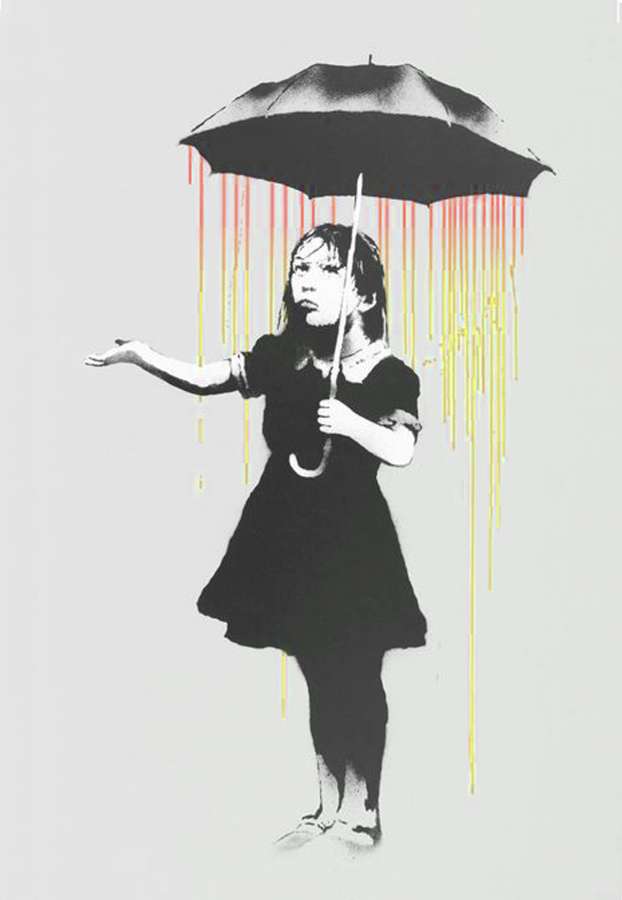 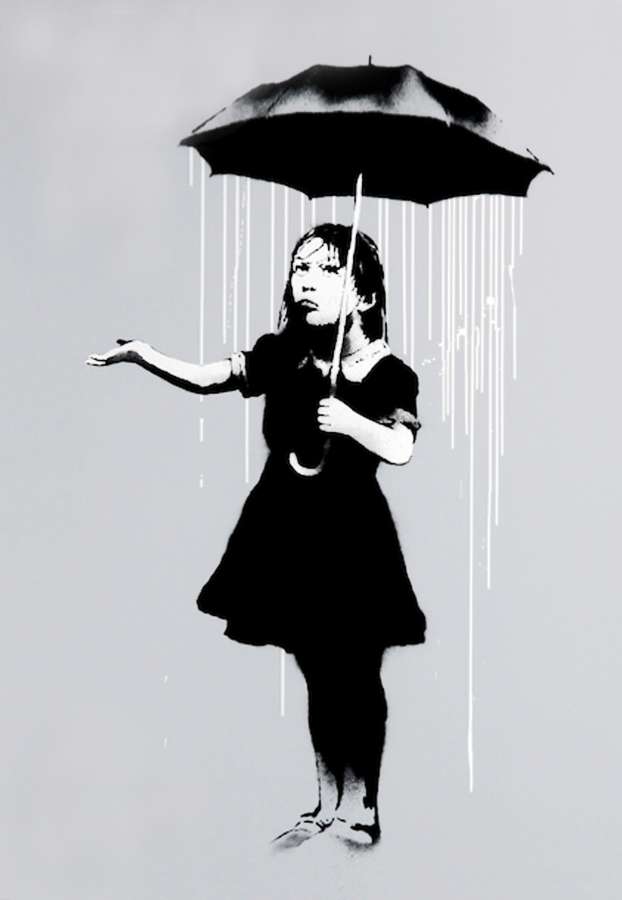 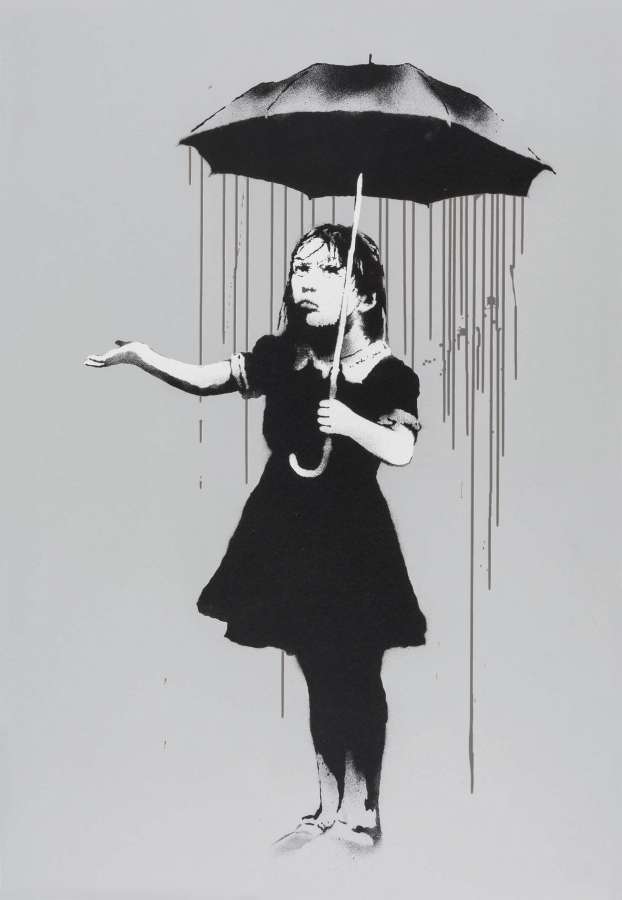 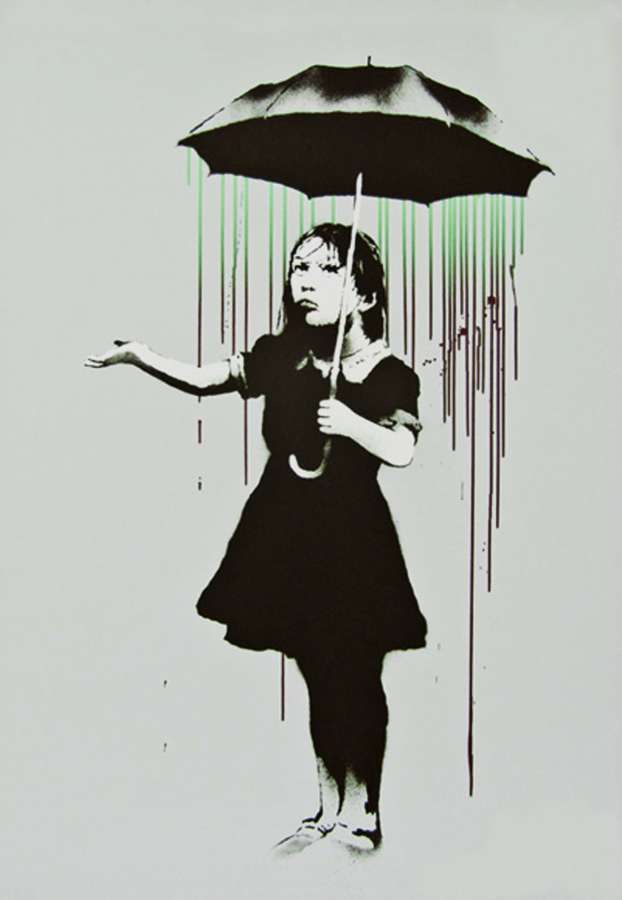 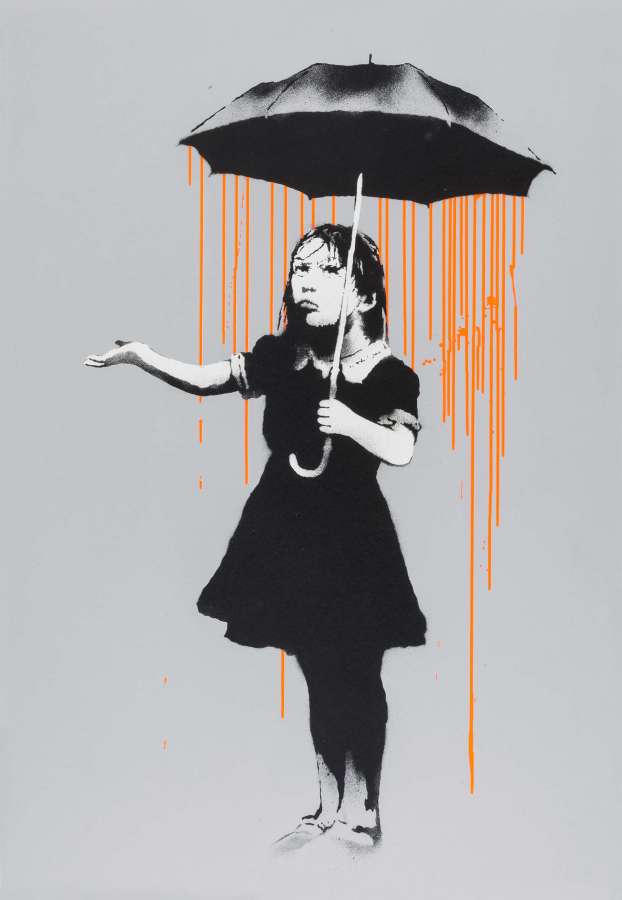 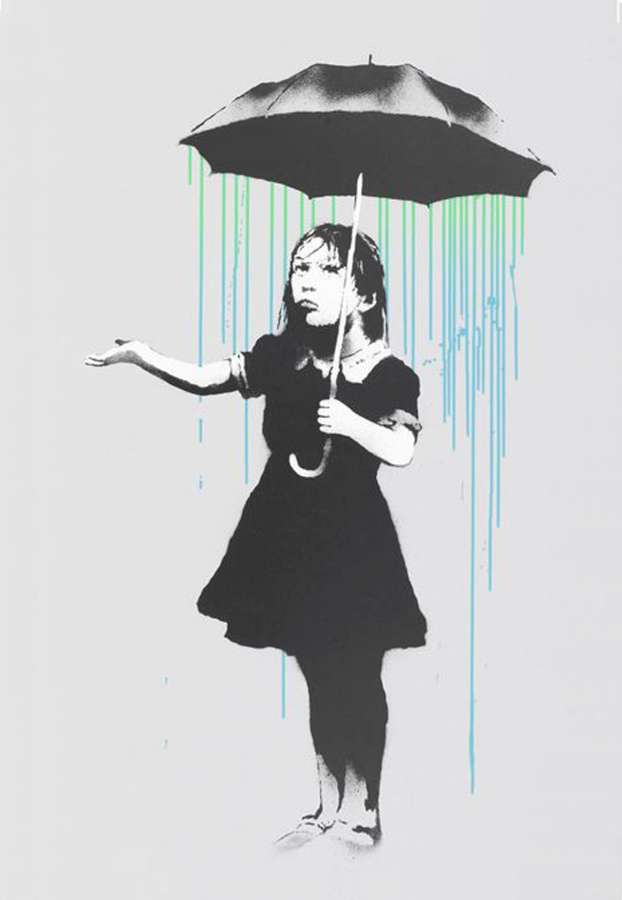 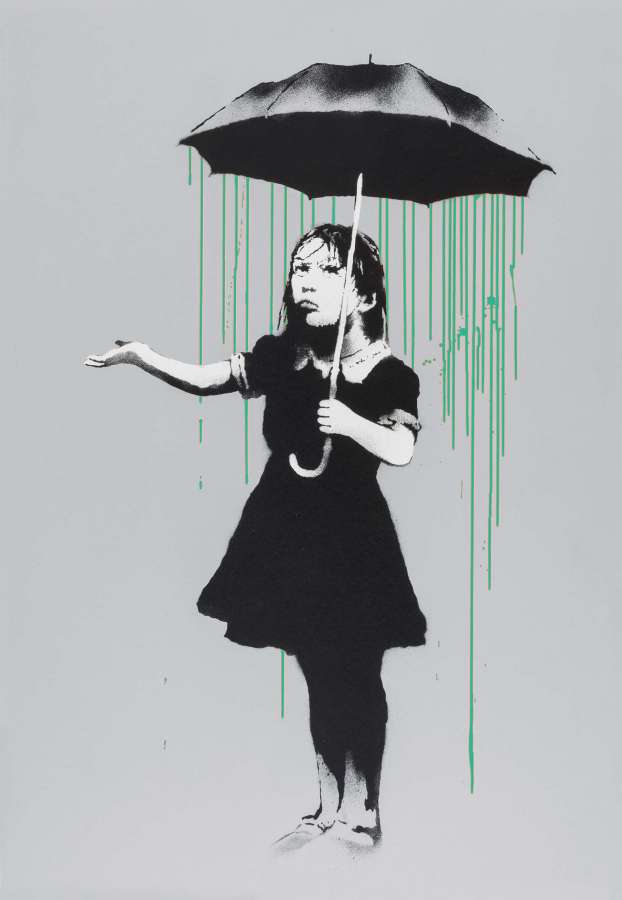 Nola was created in response to the hurricanes that devastated New Orleans during Hurricane Katrina in 2005 and Hurricane Gustav in 2008. Banksy’s Nola is hands-down one of the most sought-after Banksy prints and paintings for its poignant imagery. 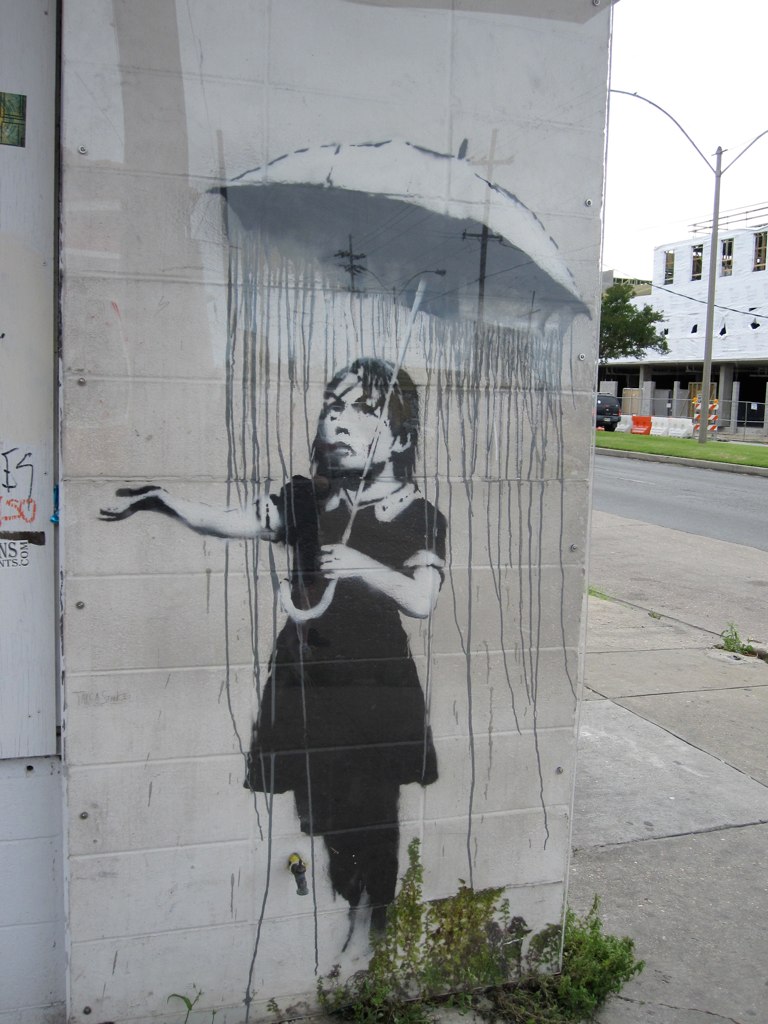 Before Nola became a Banksy print for sale, it was a stencil that Banksy created in 2008 as New Orleans began the largest evacuation in the United States’ history with the advent of Hurricane Gustav. The city was scarred by the devastating effects of 2005’s Hurricane Katrina, when the levees that were supposed to protect the city from flooding broke and thousands of lives, businesses, and homes were lost. Banksy created Nola (the city’s nickname) to sympathize with the people of New Orleans. The graffiti art piece depicts an innocent young girl who relies on her umbrella for obvious protection against the rain, but discovers that the umbrella itself is the source of the rain. She is shown reaching a hand dubiously out of her failed shelter to see if it is raining outside as well.

“Graffiti is one of the few tools you have if you have almost nothing. And even if you don’t come up with a picture to cure world poverty you can make someone smile while they’re having a piss.”
― Banksy, Banging Your Head Against a Brick Wall

Banksy is a provocative political activist whose street art and prints can be meaningful to almost everyone. The Nola stencil represents how things that are supposed to protect us can also hurt us.

If you would like to sell your Banksy art, Nola is a very highly sought-after Banksy print. If you would like to buy Banksy’s Nola, the AP and multicolored prints are rare and exceedingly valuable additions to any collection, and the original commercial runs are also a wise acquisition Hexagon Gallery is the leader for Banksy art sales in the United States. To sell or buy Banksy art, please contact info@hexagongallery.com.