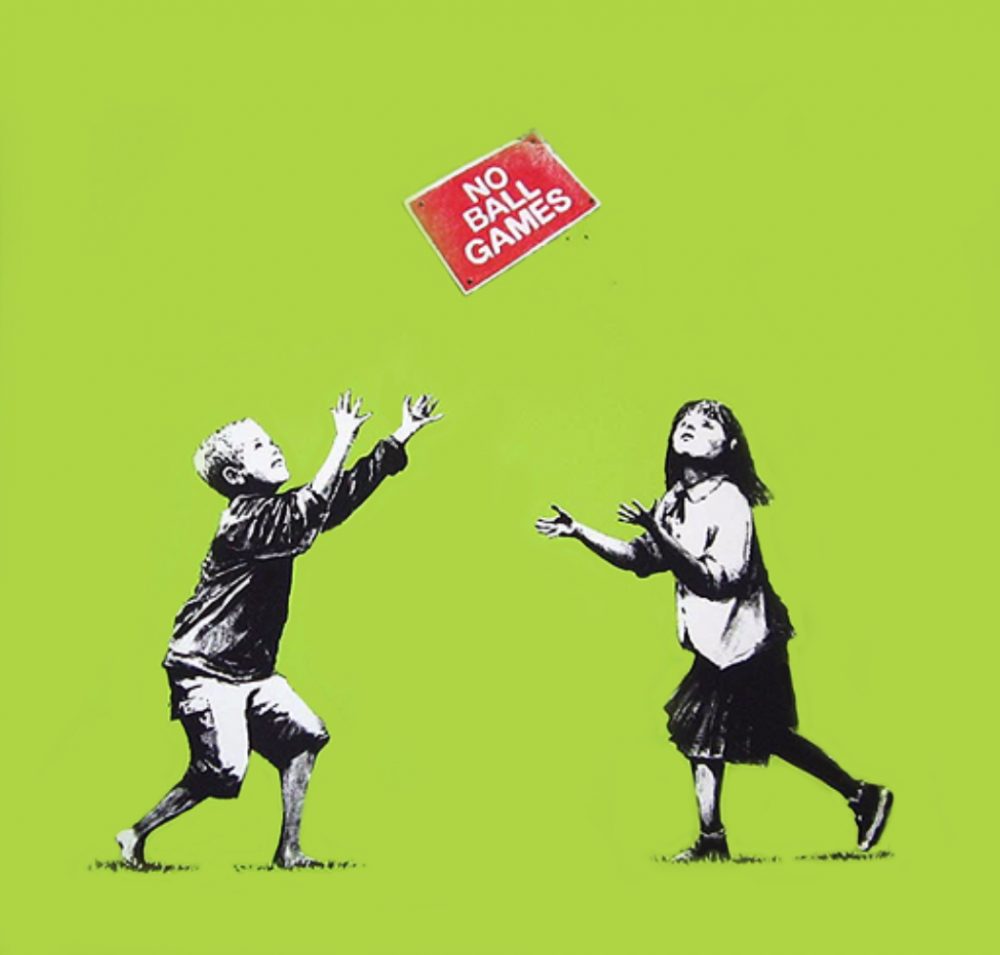 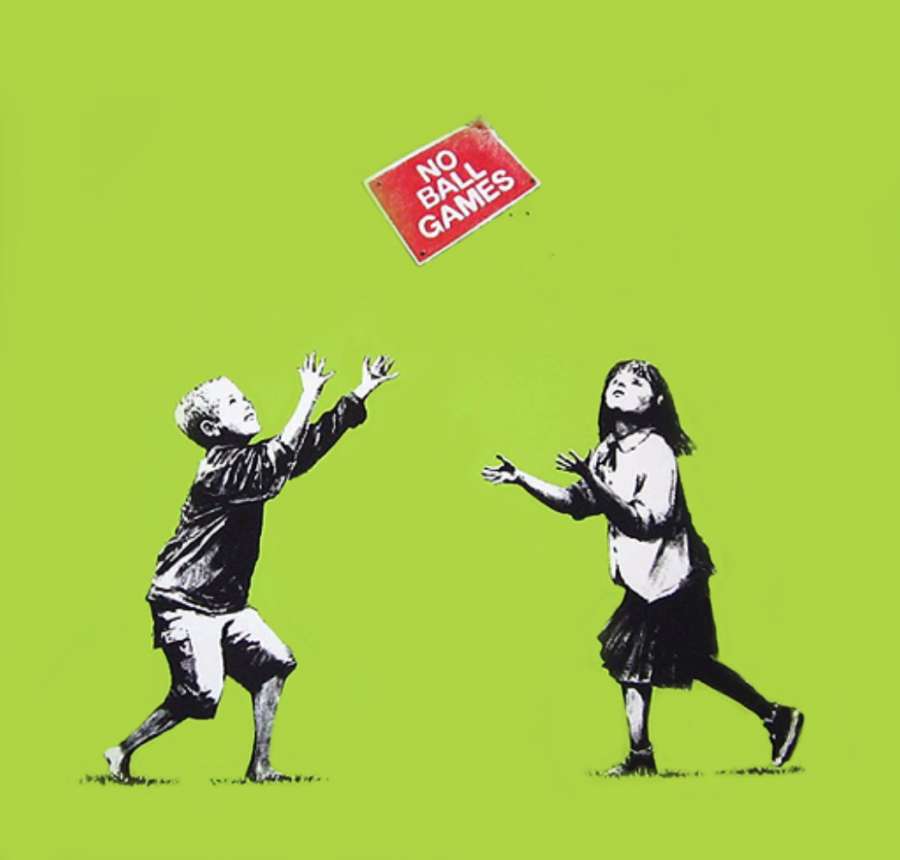 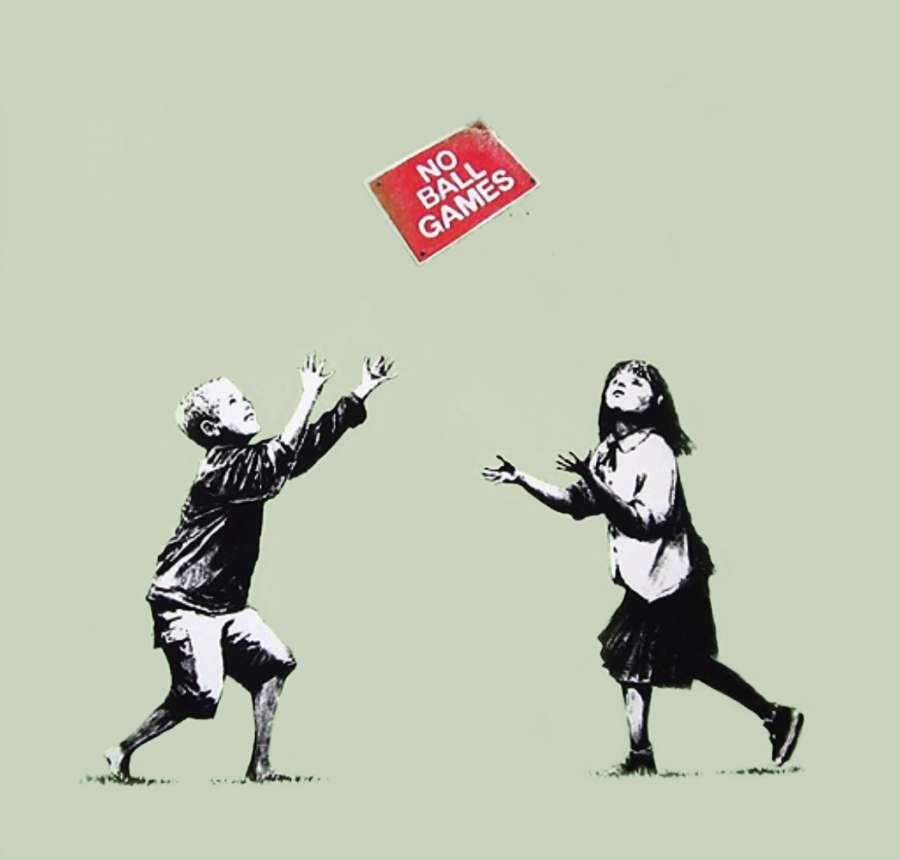 For Banksy fans, their first exposure to Banksy’s No Ball Games image occurred when Banksy threw up the graffiti stencil in the North London neighborhood of Tottenham in 2009 before it was released as a print in both grey and green colorways. 2009 would be a turning point for Banksy as he parted ways with long time gallerist, Steve Lazarides and announced that the entity known only as Pest Control office would be the sole point of sale moving forward for future artwork sales. 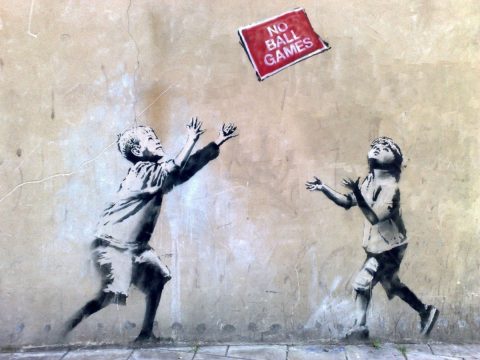 Seen here is the Banksy street stencil of No Ball Games, which was placed in Tottenam, England. 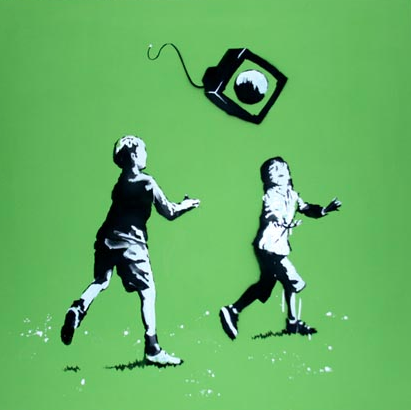 Seen here is one of the earlier incarnations of Banksy’s No Ball Games on canvas. It would later evolve and go through stylistic changes before it would be released as the print many know of today. 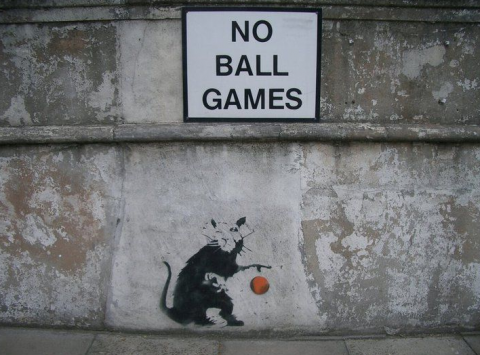 In addition to the prints and paintings with children, Banksy also referenced the No Ball Games artwork in a street stencil featuring a sewer rat.

Many people are unaware that the Banksy print No Ball Games appeared three years prior to the the Tottenham installation at his iconic exhibition, Barely Legal, which took place in the downtown Los Angeles area of Skid Row in 2006. In it’s first variation, the kids are seen tossing a tube television with a ball displayed on it’s screen. The image has evolved since its first appearance in 2006 and there have been references to this image in other street art works which show street rats playing with balls as well. 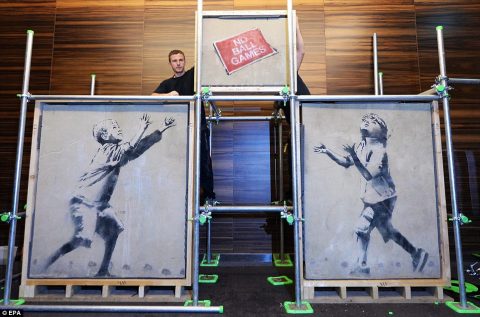 The original street stencil of Banksy’s No Ball Games would first be placed behind perspex glass before ultimately being removed in three parts seen here on the left.

Banksy’s No Ball Games eludes to a liberation of childhood and children’s exemption from life’s rules and expectations. The children are in an area not zoned for fun and play, but do so in defiance without a care going so far as to toss the sign as if it were a toy.

If you would like to sell your Banksy art, Banksy’s No Ball Games is a sought after print by collectors everywhere. Hexagon Gallery is the leader for Banksy art sales in the United States. To sell or buy Banksy art, please contact info@hexagongallery.com.