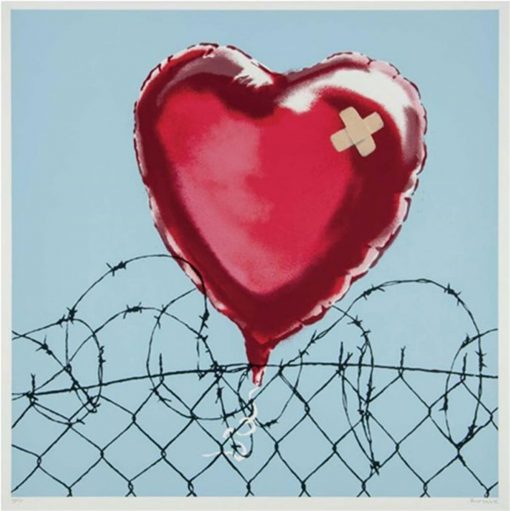 The Banksy artwork Love Hurts is a highly coveted artist proof print that was only released to VIP friends of the artist and has never been made available to the public. The print shows a wayward and damaged heart-shaped balloon rising above a barbed wire fence.

This Banksy print is layered in its meaning and opens up the floor to many interpretations and its unanswered questions showcase a more sophisticated side of the artist. Where does the damage on the balloon come from? Was it from a previous attempt to scale over the prickly barrier, or was it damaged on its own from something long before? Is the balloon stuck in the fence or will it succeed in its attempt to do what balloons inherently do by nature – rise above? Love Hurts distills a complex scenario into a simple proverb: love can be a very painful, experience, but a hopeful heart has the potential to be set free. 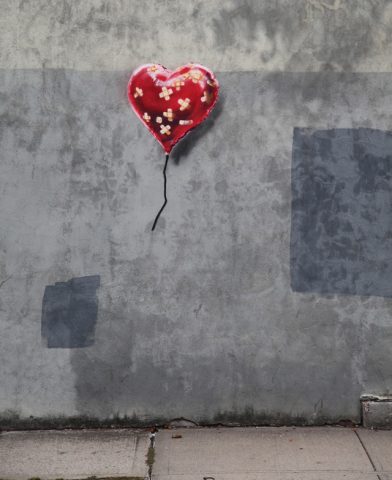 The image of the wounded heart has appeared outside of the print release both during Banksy’s NY residency, Better Out Than In, and later in the Walled Off Hotel in Bethlehem.

The motif of the Love Hurts balloon has been used at various times in multiple formats. Previously, Banksy spray-painted this image on the streets of New York. In 2017, the image was installed as a painting in Banksy’s Walled Off Hotel (located in Bethlehem, Israel). Chris Martin, singer of the British pop band, Coldplay is rumored to own the original Love Hurts canvas. 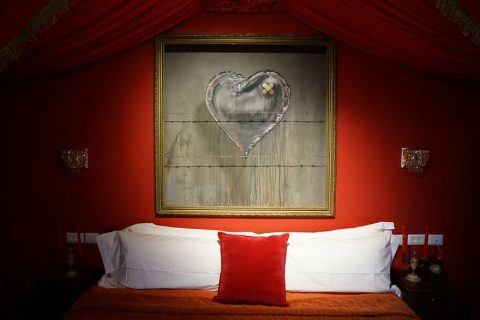 In 2017, Banksy opened the Walled Off Hotel, a permanent destination and exhibition of his works in Bethlehem, Israel. Seen here is another, different incarnation of the Love Hurts imagery.

If you would like to sell your Banksy art, the Love Hurts print is a highly coveted and rarified artist proof. If you would like to buy Banksy’s Love Hurts AP, you will find the investment and enjoyment well worth the effort. We are happy to discreetly discuss availability on this print with qualified collectors who are keen to acquire the print with the intention to enjoy it and not resell it. Hexagon Gallery is the leader for Banksy art sales in the United States. To sell or buy Banksy art, please contact info@hexagongallery.com.