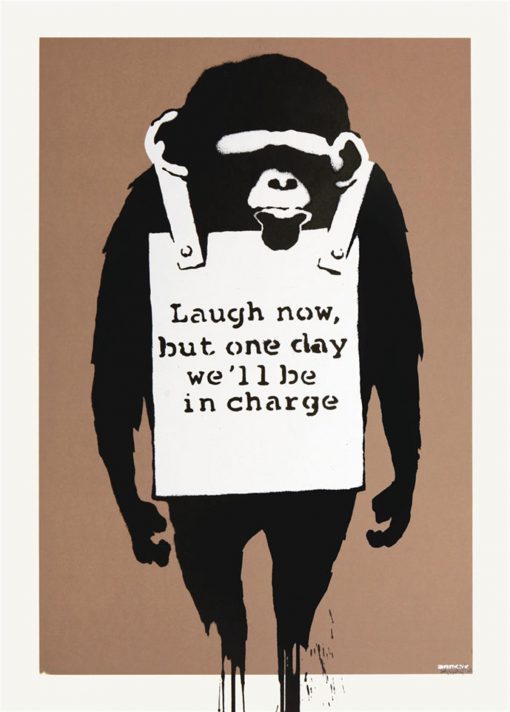 Banksy’s Laugh Now is one of the earliest Banksy artworks that became known worldwide, and reached a milestone in Urban Art when one of the original artworks sold at auction in 2008 for almost $500,000. Laugh Now, first created in 2002, is an unusual artwork because it was originally commissioned by a nightclub in Brighton instead of appearing on the streets. Since then, Banksy has recreated this iconic piece of art for sale many times, with several versions of the street art piece appearing as prints in the often-forgotten Existencilism exhibition of 2002, Banksy’s first solo show in Los Angeles. Laugh Now is a popular Banksy artwork and the artist has since used the monkey as a common character symbol in his graffiti art. 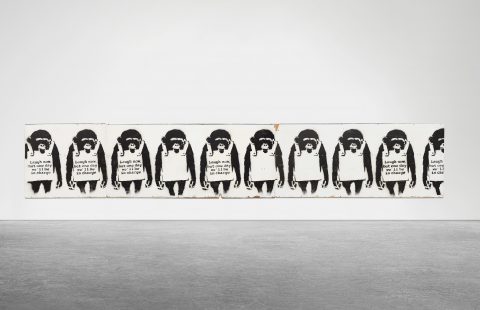 This large format, repeating Laugh Now stencil painting is the original Nightclub commission and was once available at auction. The painting realized a record action price at the time..

Laugh Now was originally created on ten boards, and was reproduced as a limited edition print for sale in 2003, with 150 signed and 600 unsigned versions. Banksy also made 69 Artist Proofs. 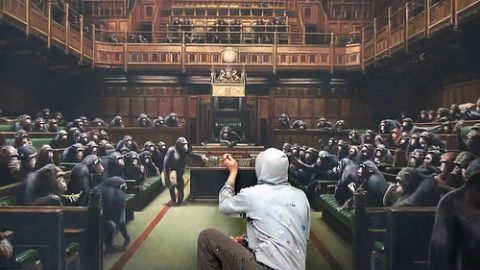 Monkeys have been a reoccurring image in Banksy’s works over the years. Seen here is the large format Banksy painting, Monkey Parliament.

Laugh Now depicts a monkey standing upright. His shoulders are sloped and his face is drawn; although the eyes are in shadow, his expression shows that he feels downtrodden and ashamed. He wears a sandwich board with text that reads, defiantly, “Laugh now, but one day we’ll be in charge.”

Banksy uses his cherished subject, the monkey, to illustrate the arrogance of humanity. Following the publication of Charles Darwin’s Theory of Evolution in the mid-1800s, which asserted that humans evolved from apes, humans set out to create distance between themselves and their relatives by ridiculing apes and monkeys as stupid savages. Monkeys have since performed demeaning tasks in public at the behest of humans and are characterized as howling baboons, aggressive monsters, cute organ grinders, and clever thieves. 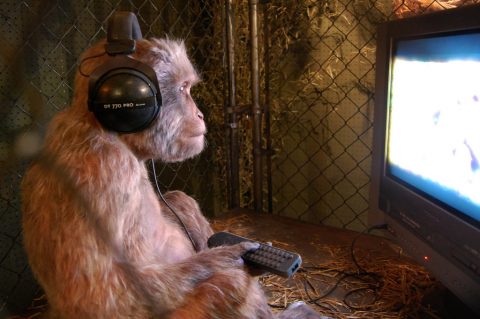 Like monkeys, graffiti art has also been demeaned and ridiculed as a savage art form made by uneducated people. Banksy, however, believes that street art is one of the most powerful and efficient means of artistic expression in today’s word. “T.V. has made going to the theatre seem pointless, photography has pretty much killed painting but graffiti has remained gloriously unspoiled by progress,” he remarks in the 2006 book Wall and Piece. The fateful words on the sign hung around the monkey’s neck are words of prophesy, and they predict that the unwanted, the shamed, and the downtrodden will rise above the rest of society because they alone see from a ground-level perspective. Banksy argues that the monkeys and the graffiti artists are the true truth-holders. “The people who truly deface our neighborhoods are the companies that scrawl giant slogans across buildings and buses trying to make us feel inadequate unless we buy their stuff.,” he notes. “Graffiti is just a form of protest art and it has more truth than most of what’s going on in the art world.”