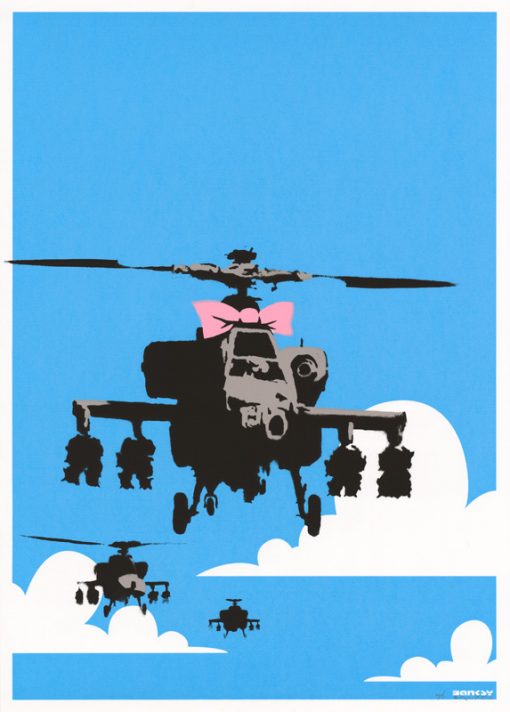 Happy Choppers first appeared in 2002 as an urban street art piece in Central London at the Whitecross Street Market. Since then, Banksy has revisited his helicopter motif many times, making Happy Choppers an iconic part of his repertoire. In 2002 and 2003, Banksy reproduced the image himself in a number of ways, from limited edition screen prints to an original acrylic painting on canvas to stencils on board, and even as a stenciled ‘chopper’ on top of a found landscape painting or two – paintings known to Banksy collectors as his ‘Crude Oil’ paintings. Happy Choppers is such a sought-after artwork by Banksy that it has been reproduced into endless commercial versions.  A unique aerosol stencil on board of Happy Choppers, created by Banksy in 2002, sold at Julien’s Auction House in April 2016 for $140,800.

Banksy’s Happy Choppers screen print was created by the artist in 2003 with an edition of 750 prints. There are 600 unsigned prints and 150 signed prints. Additionally, there are 33 signed Artist proofs. Banksy created the screen print for a Christmastime group exhibition that he and several other artists put on in the early 2000s called Santa’s Ghetto.

Happy Choppers depicts a squadron of armed military helicopters with a cartoon-y pale pink bow adorning the top of the ‘chopper’ (an American slang word for a helicopter which became popular during the Korean War in 1950-53) in the foreground. The pink bow on the fighter aircraft mocking chauvinism.

“The greatest crimes in the world are not committed by people breaking the rules but by people following the rules. It’s people who follow orders that drop bombs and massacre villages.” – Banksy

Banksy is an outspoken critic of militarism and the corruption of governments that belie their intents. In Happy Choppers, the pink bow represents the public intent of fighter aircraft squadrons as they make their presence known across sunny skies: routine flights that help protect their countrymen. Banksy thinks we should examine their alleged innocent motives more closely.

If you would like to sell your Banksy art, the Happy Choppers print is both a highly coveted and rarified artist proof, and a popular and well-loved screen print. If you would like to buy Banksy’s Happy Choppers, you will find the investment and enjoyment well worth the effort. Hexagon Gallery is the leader for Banksy art sales in the United States. To sell or buy Banksy art, please contact info@hexagongallery.com.