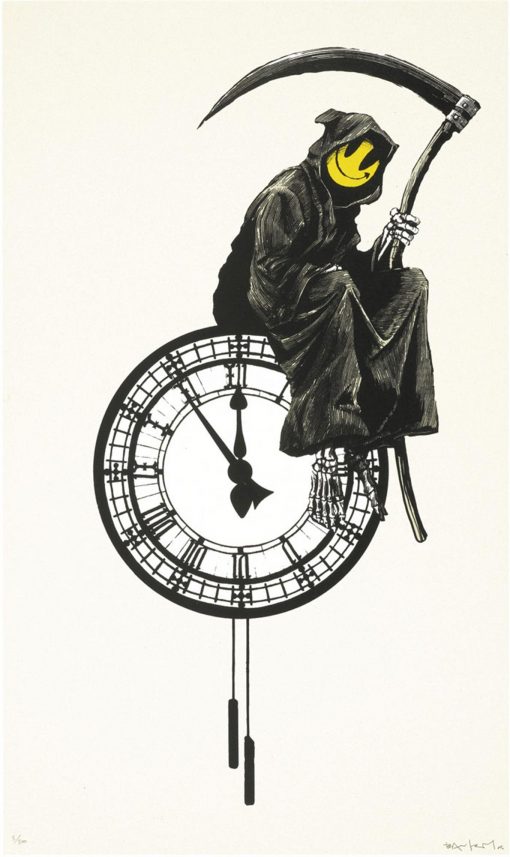 Banksy’s Grin Reaper is one of the earliest known street art themes from the artist. It appeared in London’s Old street neighborhood where Banksy first tagged with the DryBreadZ Crew. Sadly, most of the examples of this piece were covered in London’s 2007 anti-graffiti sweep, but Banksy reproduced the popular “Smiley Grim Reaper Death On A Clock” image in an iconic 2005 limited edition screen print with 300 signed pieces.

Banksy’s Grin Reaper sits hunched over the face of the London Tower clock with his symbolic scythe in hand and his bare, skeleton feet swinging over the clock’s hands. The clock’s hands are at 5 minutes from midnight. Although the clock and Reaper are printed only in black and white on a gray background, the black cloak of the reaper is printed in an extremely painterly manner that makes the print look like a hand-drawn artwork. 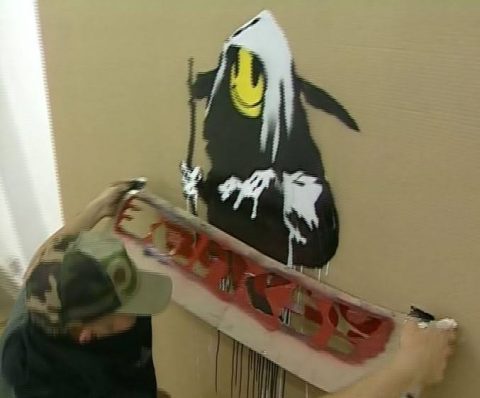 Banksy working in the studio on a Grin Reaper stencil painting on cardboard. Occasionally, the image of the Grin Reaper has been seen with the text ” Have A Nice Day” in different formats. The same text has also been used on Happy Choppers paintings. 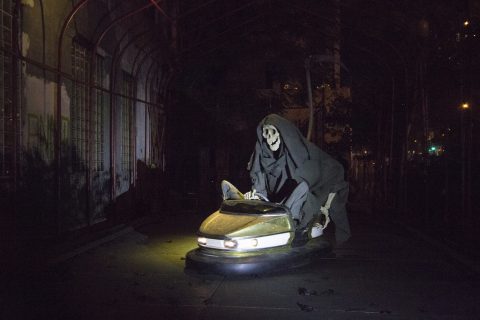 The Grin Reaper has been a reoccurring theme for Banksy. The artist revisited the figure of death in his New York residency, Better Out Than In. 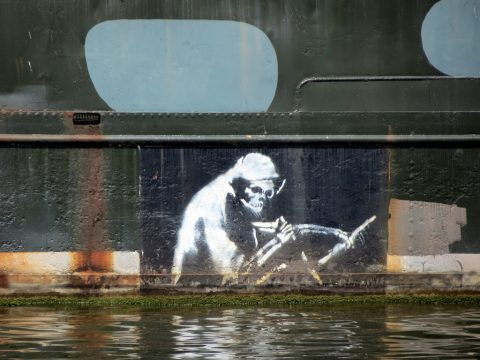 Another Banksy Street installation of the Grim Reaper.

The strangest part of the image is the face of the Grin Reaper, appropriately a pun on the classic “Grim Reaper” because the visage is a flat yellow “Smiley” icon. The bright, simply-drawn Smiley presents such a childlike design of contentment that it is ripe for subversion, having been associated with both the acceptance and vilification of 1960s/1970s peace ideals and 1980s/1990s acid house culture (not to mention hundreds of other positive and negative pop culture appropriations).  Here the symbolism is clearly negative, signaling the placid, unbiased face of death as it waits for the hour to strike upon its unpreventable killing job. Grin Reaper is a haunting image that is at once friendly and sinister.

If you would like to sell your Banksy art, the Grin Reaper is a highly desirable and valuable screen print that will be an iconic addition to any collection. If you would like to buy Banksy’s Grin Reaper, you will find the investment well worth the effort because its historical value will continue to appreciate. Hexagon Gallery is the leader for Banksy art sales in the United States. To sell or buy Banksy art, please contact info@hexagongallery.com.