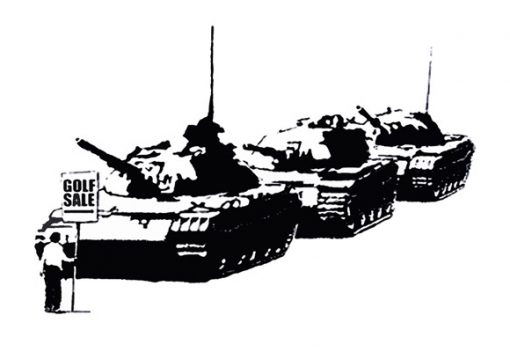 Banksy’s Golf Sale is an early iconic artwork that began its life as an urban street art piece on a wall in Bristol, England. Banksy created a screen print for Golf Sale in 2003, and released the artwork for sale in an edition of 750, with 150 signed prints and 600 unsigned prints.

Golf Sale adapts an infamous photograph of a Chinese protestor at Tiananmen Square, the student-led protest movement in 1989 that shocked the world with the violent conflict between students and the government over the issue of democracy. In the original photograph, a bold Chinese student blocks the path of three military tanks that move crushingly in his direction.

Banksy transforms this iconic symbol of political protest into a satire by replacing the slogan of the picket sign that the protester holds with the words “Golf Sale” and an arrow pointing to a place outside of the picture plane. As an outspoken critic of militaries and government oppression, Banksy uses the offhand phrase to criticize the intent of the tanks, alluding that a physically violent war on ideas is about as effective as firing off golf balls into enemy territory.

If you would like to sell your Banksy art, Golf Sale is an early and highly provocative image that Banksy collectors are seeking. If you would like to buy Banksy’s Golf Sale, it is a classic and valuable example of one of Banksy’s most iconic motifs at an early juncture in his career. Hexagon Gallery is the leader for Banksy art sales in the United States. To sell or buy Banksy art, please contact info@hexagongallery.com.