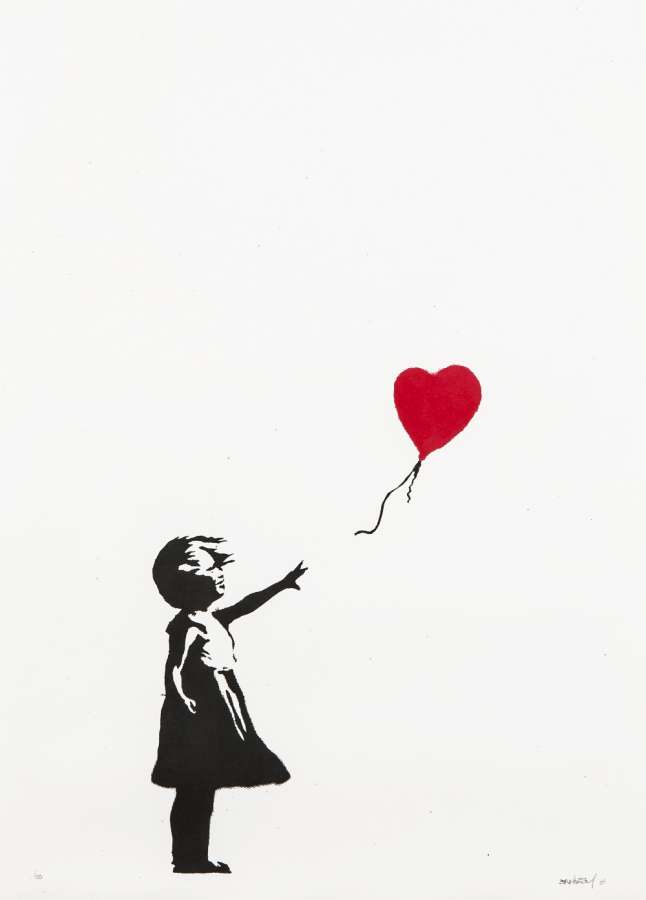 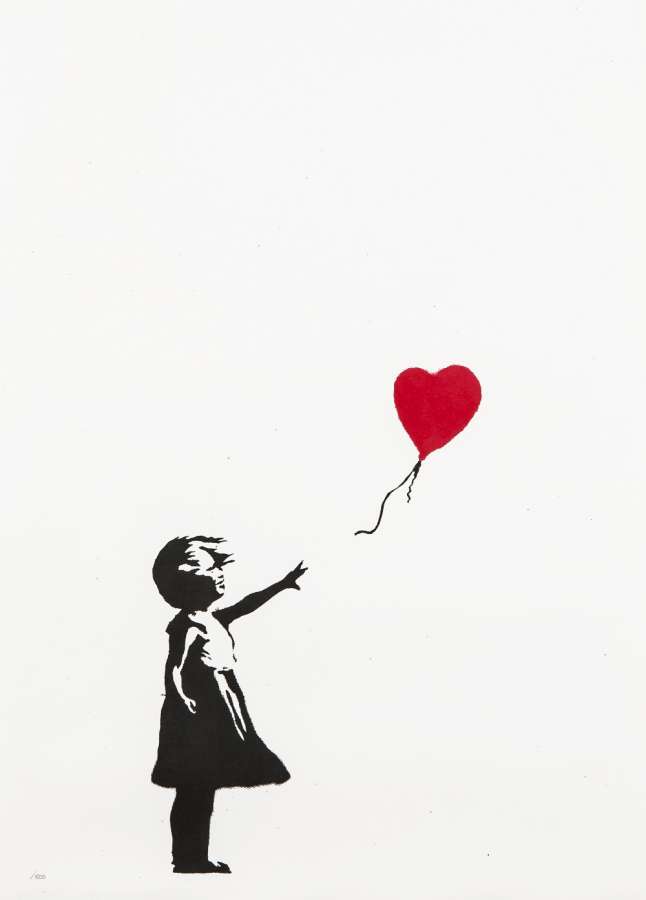 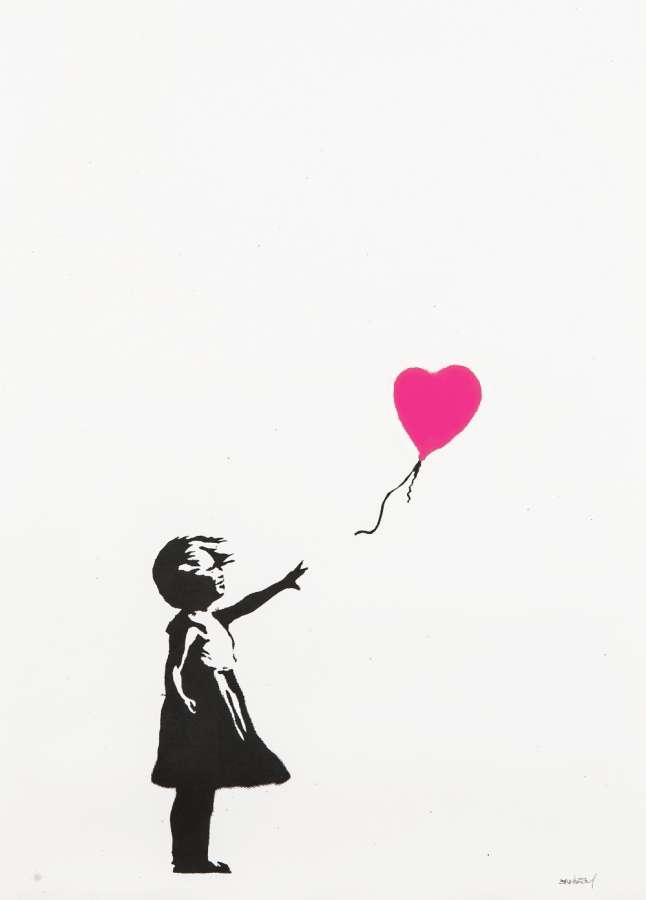 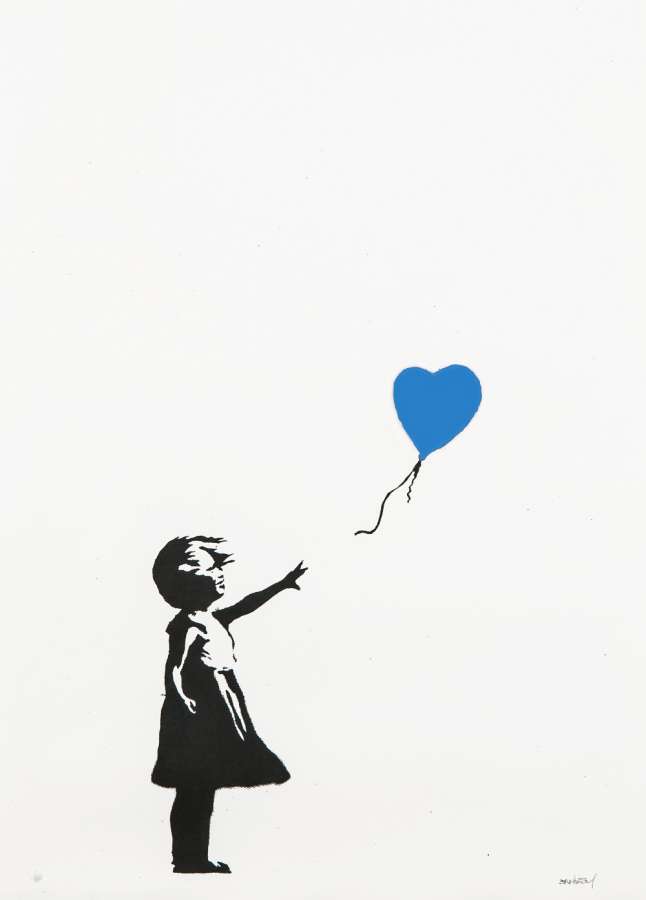 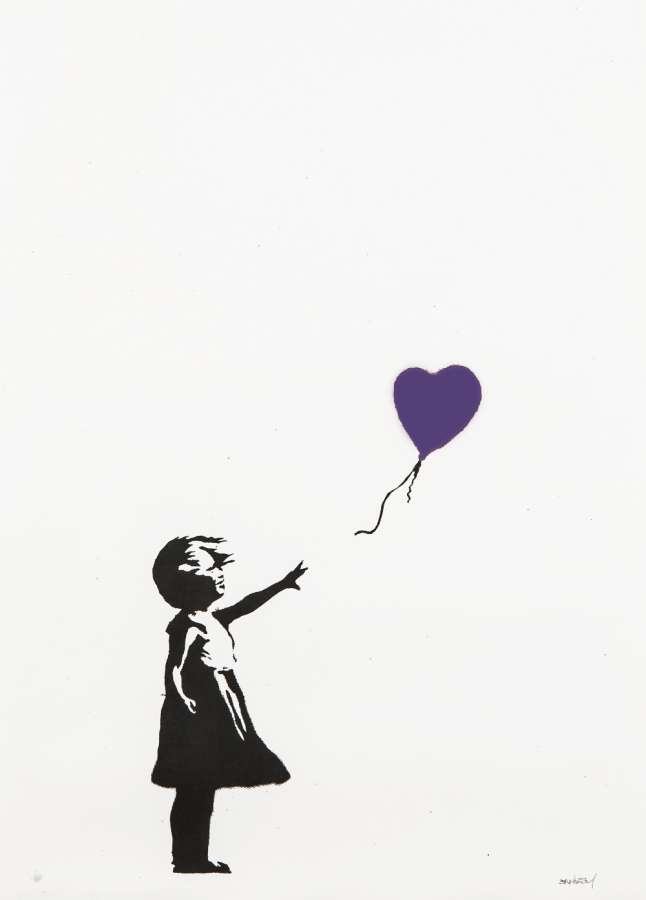 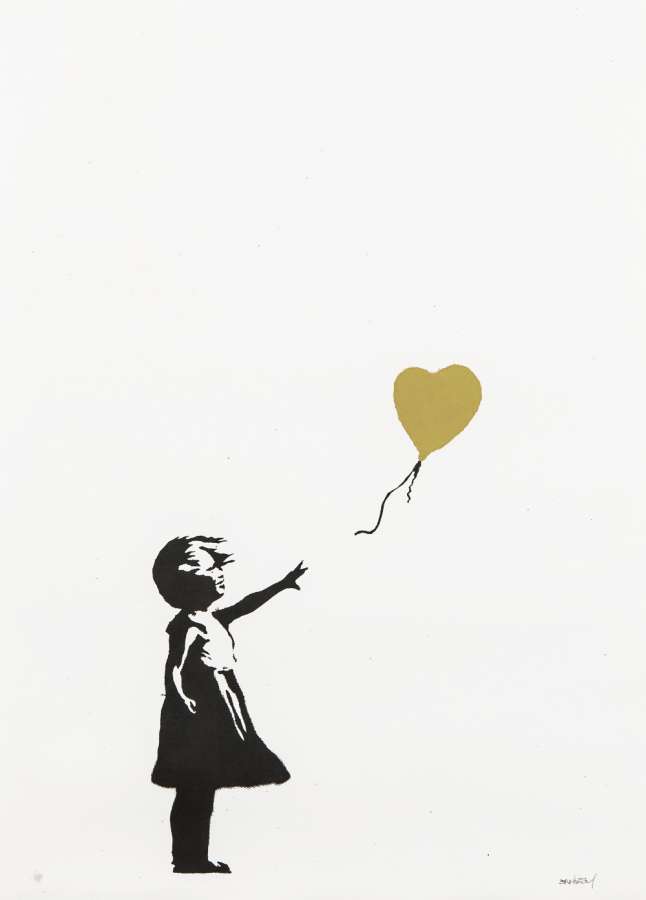 Girl with Balloon first surfaced in 2002 on a dirty concrete wall under the stairway of a loading dock in the South Bank of London. Since then, the young girl letting go of her balloon has become a popular symbol of innocence and hope in the face of diversity, and is one of the best-known examples of Banksy art in the world. It is one of the most sought-after Banksy prints.

Banksy’s Girl With Balloon is timeless because it represents the childish innocence that we were all born with, and evokes a desire to protect and cherish her hopes for the future. To create the original street art piece, Banksy chose a grimy wall in an impoverished area, where the artwork’s meaning would have its greatest impact. He buffed away the stains from the wall where he intended to stencil the girl, which gives her figure a sense of purity and illumination. The little girl is stenciled in black and white, looking up toward her balloon with a hint of a smile. There is clearly wind blowing from behind the girl, which blows forward her hair and dress. She is setting free — or reaching for — her red, heart-shaped balloon; its string trails away from her fingertips as it launches buoyantly into the sky. A handwritten message next to the original graffiti art reads, “There is always hope.” 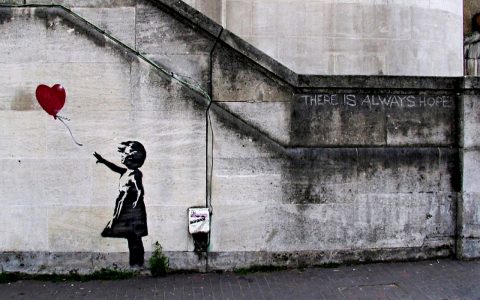 This is the first appearance of Banksy’s Girl With Balloon on the streets of London. It would later become the most iconic image in contemporary urban art.

Millions of people have felt connected to Banksy’s Girl with Balloon since the graffiti art first appeared. Banksy produced a limited edition of 750 original prints in 2004 and 2005, 150 of which were signed. These rare prints are the holy grail of Banksy prints and Banksy paintings for sale, and are highly valuable.

Banksy’s Girl With Balloon has also been issued into inexpensive prints and canvases of all sizes and is a popular choice for a tattoo. Everyone can create meaning from the innocence and simplicity of the girl and the lightness of her heart-shaped balloon, making Girl With Balloon a commodity. In 2014, Banksy re-issued a virtual image of Girl With Balloon, re-worked to depict a Syrian girl and the hashtag #withSyria alongside her. Banksy’s appropriation of his own work restates its importance to our cultural vernacular and reminds the world that the greatest gift we can give one another are gifts of love and hope. 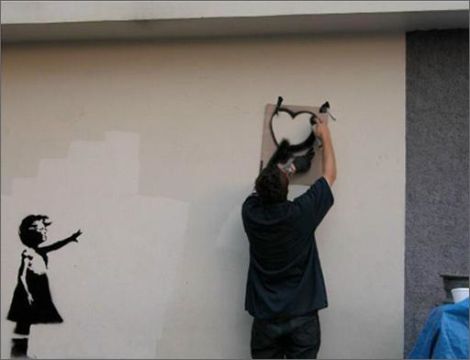 Seen here is an image of Banksy installing the Girl With Balloon painting on the streets of Jamaica. Pest Control has neither confirmed or denied the validity of this photograph.

If you would like to sell your Banksy art, Girl With Balloon is one of the most famous and sought-after street art pieces in its limited edition print form. If you would like to buy Banksy’s Girl With Balloon, it is a historical image within the sum of street and contemporary urban art. To learn more about this artwork or to buy or sell your Banksy art, please contact info@hexagongallery.com.