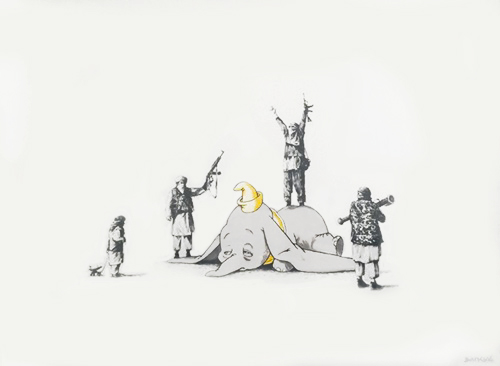 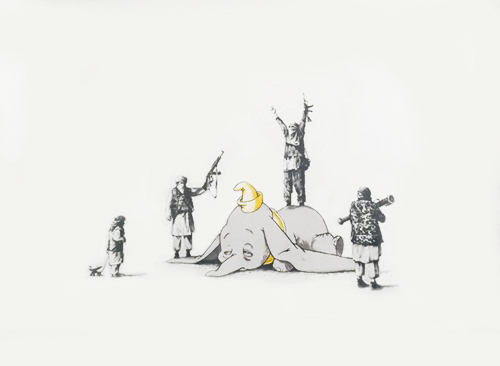 Banksy’s Dumbo is an extremely rare Banksy print that hardly ever comes up for sale. This Banksy art was never released publicly and was made in an edition of 25 for a handful of very lucky collectors in 2014. The series is especially sought-after because all 25 prints are hand-finished with watercolor.

BANKSY DUMBO ORIGINAL ANIMATION VIDEO. THE ANIMATOR, ULI MEYER IS RUMORED TO HAVE WORKED ON THIS PROJECT.

Dumbo is a darkly-themed artwork that shows jihadists standing on and around a slain cartoon elephant named Dumbo, who is mistreated during his life as a circus animal in the 1941 Disney animated film. The image symbolizes the treachery of radicalized movements toward the innocence and vulnerability of youth.

The Dumbo print was released after a video of the same name, which Banksy created during his Better Out Than In residency in New York City in October 2013. As part of his effort to release one piece of artwork every day for 31 days, he posted the Dumbo video (which shows Syrian rebels shooting an air rocket and capsizing their target, featuring a superimposed animation of Dumbo the elephant as target) in the Dumbo neighborhood of Brooklyn.