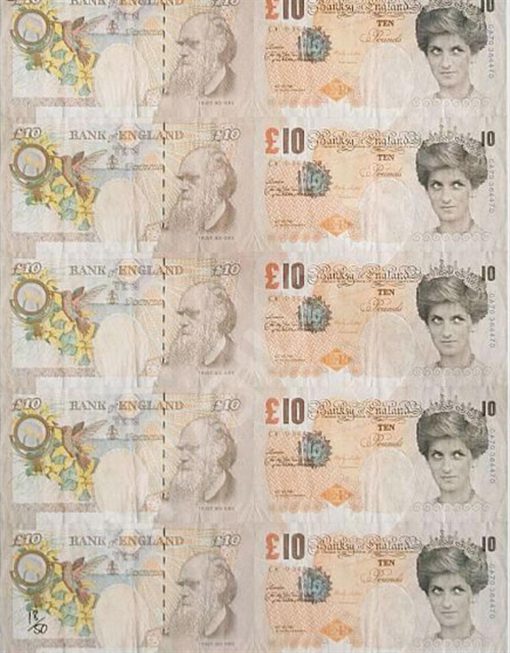 Banksy’s Di Face Tenner is an iconic, unusual, and early work on paper from 2004. Di Faced Tenner is essentially counterfeit money representing £10 notes. At least 100,000 were printed — enough to total £1,000,000 in fake currency. It was created for a public stunt Banksy had orchestrated that involved dropping a suitcase full of the fake currency in public, during rush hour at the Liverpool tube station in London and at the Notting Hill Carnival and Reading Festival. Later that year, an unknown amount of Tenners were also released at the exhibition preview of Santa’s Ghetto, held at Lazarides Gallery. Today, originals and reproductions of Di Faced Tenner are popular souvenirs, and torn pieces of the Tenners are used as a symbolic seal of authenticity on the majority of Pest Control authentication certificates. 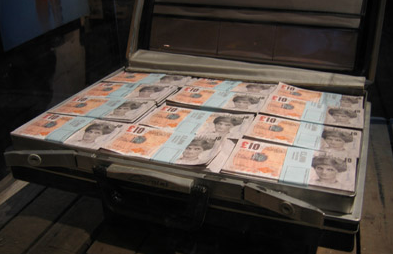 Di Faced Tenner looks exactly like a regular £10 note except for the details. Instead of “Bank of England,” the note reads “Banksy of England.” In place of a portrait of Queen Elizabeth II, there is a portrait of the late Princess Diana. Under the banner, a typewritten inscription reads: “I promise to pay the bearer on demand the ultimate price.” On the back side, under the usual portrait of Charles Darwin, the motto reads “Trust No One.”

“Di-Faced” is a play on the word ‘defaced,’ which is Banksy’s nod to the counterfeit nature of the work. The promise on the front of the note is a pointed allusion to the fate of the late Lady Di, often called “the people’s princess” by the media. Banksy’s intention for this work on paper was both artistic and activistic: in the mad dash of the crowds to claim what seemed to be money falling from the heavens, individuals were unscrupulous. For a period of about 12 hours, some of these counterfeit notes were mistakenly taken at face value and exchanged for goods of equal standard value. After the hoax was revealed, however, the value of each Tenner increased. From the situational anarchy of the situation to the bullish, capitalist leap in value after the prints were perceived to be art instead of currency, Di Faced Tenner is a commentary on the relationship between art and value in our 21st century society.

If you would like to sell your Banksy art, Banksy’s Di-Face Tenner is a popular work to buy because of it is a story as well as a piece of Banksy art. If you would like to buy Banksy’s Di Face Tenner, it is fairly easy to find, although the values range widely. A mint-condition Di Faced Tenner is an excellent start or addition to any collection of works on paper by Banksy. Hexagon Gallery is the leader for Banksy art sales in the United States. To sell or buy Banksy art, please contact info@hexagongallery.com.