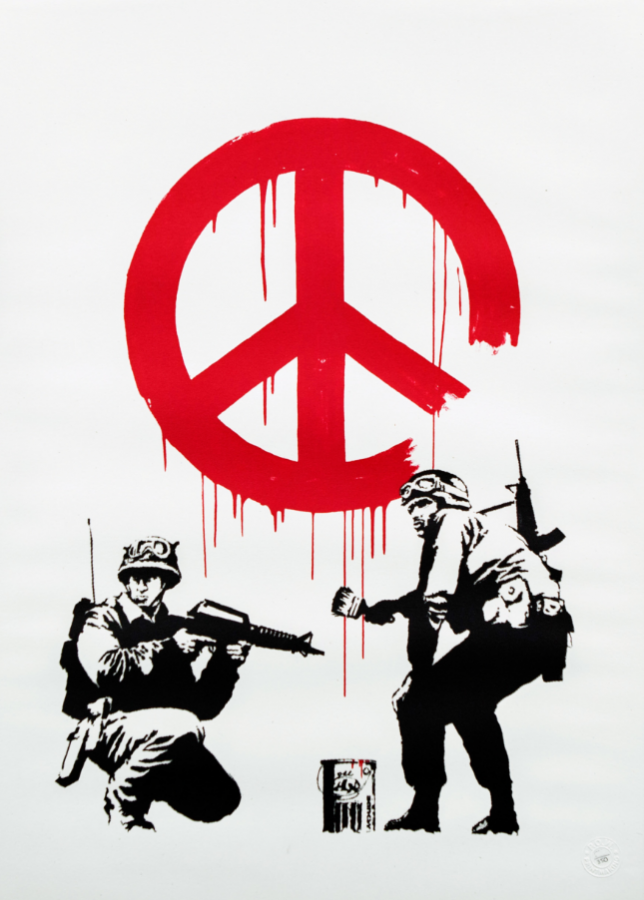 Part of Banksy’s success delivering his unique brand of sarcasm comes not only from his intellectual treatment and biting humor, but his keen sense of placement. CND Soldiers is an anti-war art statement that was placed directly across from the British Parliament and was later removed by authorities. At the time this work was placed, there was a long standing anti-war protest led by peace campaigner, Brian Haw. Brian Haw began protesting outside the British Parliament prior to 2001 for their participation in attacks on Iraq and had become a symbol of peace, nationally. 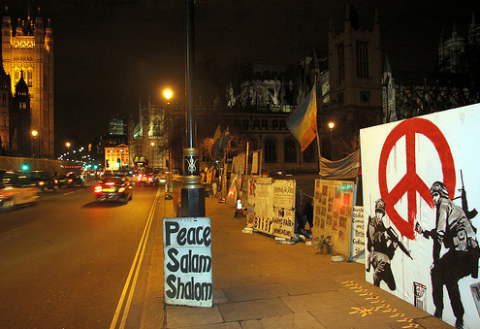 Seen here is the original installation of the stencil painting across from the British Parliament. Image courtesy of AOTS.

The print shows two soldiers surreptitiously placing a a peace symbol in red paint, symbolizing the color of blood on the wall. One soldiers acts as the scout, surveying their surroundings for would-be onlookers while the other performs the task of placing the symbol. It is ironic that solders acting on behalf of the government, not ordinary citizens are the ones placing the symbol on the wall. The print suggests that even individuals who are vehicles and pawns of war have grown tired of their entanglements and want out.

If you would like to sell your Banksy art, Banksy’s CND Soldiers is a sought after print by collectors worldwide. Hexagon Gallery is the leader for Banksy art sales in the United States. To sell or buy Banksy art, please contact info@hexagongallery.com.