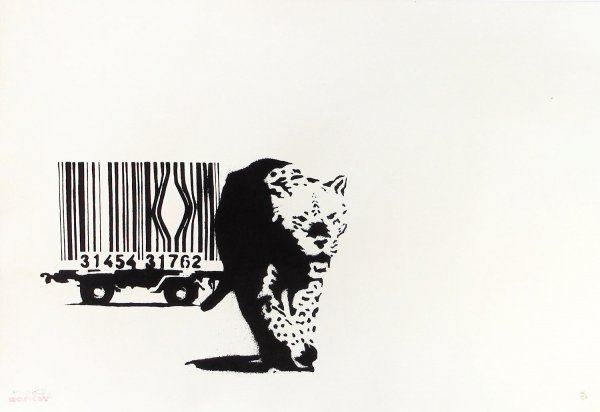 Barcode, often called ‘ Barcode Leopard Tiger,’ is an early and highly coveted stencil artwork created by Banksy in 2004. He released the artwork for sale in an edition of 750, with 150 signed prints and 600 unsigned prints. Some prints include a red stamp in the lower left corner, while some do not. Banksy has used the image of the barcode in other works including the Barcode Shark and art for album covers.

The Barcode image itself is one of Banksy’s earliest. The Bristol-born artist stenciled it onto a wall outside of a house in his hometown circa 1999 or 2000, before he joined the London scene. The urban street art piece vanished in 2010 during extensive remodeling of the property, but re-emerged four years later at a nearby grammar school where one of the teachers revealed that her husband had been one of the constructions workers at the scene of the remodel. The teacher and her husband recognized that the stencil, which was slated to be demolished, was a Banksy artwork. They received permission from the homeowner to cut out the stencil painting and kept it hidden under their own bed for four years, until they were ready to show it. Another rendition of the same stencil appeared on an extremely rare print in the 2002 show Existencilism, Banksy’s first Los Angeles gallery show. The piece was numbered 1 of 5. 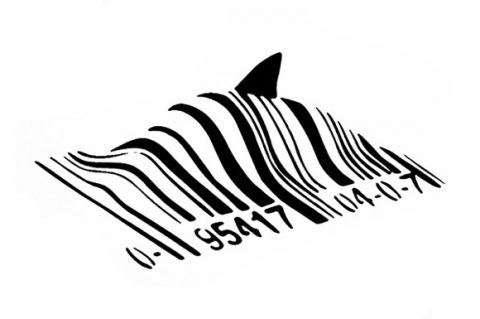 Seen here is a very rare Barcode Shark by Banksy. 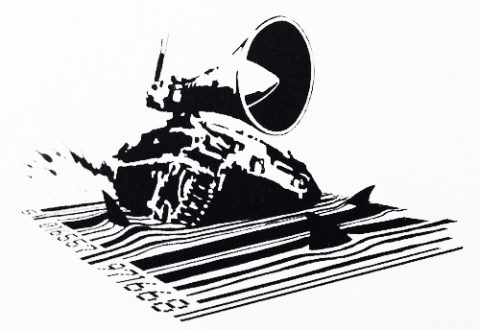 Seen here is an image of a singing tank and barcode sharks by Banksy, which was used as an album cover.

Bansky’s Barcode is a one-color screen print depicting a leopard (some say a tiger) sauntering into the foreground of the composition, leaving behind a cage on wheels. The cage is actually a bar code symbol, and the bars of the cage are also the bars of the code. The bars are parted open in one area, leaving a gaping hole where we can assume that the leopard escaped. Barcode is an extremely clever artwork that calls attention to the illegal leopard, tiger, and big cat trading on the world black market.

If you would like to sell your Banksy art, Barcode (Leopard Tiger) is an early and highly provocative image that doesn’t come available very often and is sought after by collectors. If you would like to buy Banksy’s Barcode, it is a classic and valuable example of one of Banksy’s most clever and iconic images at an early juncture in his career. Hexagon Gallery is the leader for Banksy art sales in the United States. To sell or buy Banksy art, please contact info@hexagongallery.com.