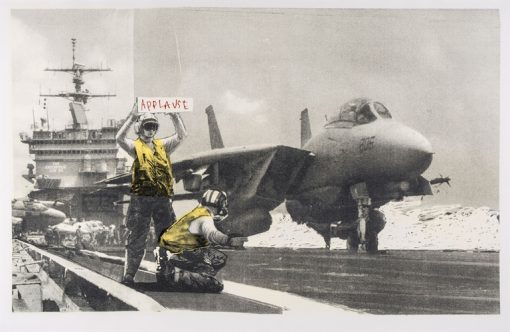 “If at first you don’t succeed, call an airstrike” – Banksy

This photo was taken from inside Banksy’s studio and shows the artist working on the original Applause painting for the Barely Legal exhibition.

Applause differs from thew rest of the Banksy artworks in the limited edition Barely Legal print set because of its size. Whereas the other five prints in the set measure approximately 76 cm x 57 cm, Applause measures 114 cm x 76 cm. It is also the most detailed screen print in the Barely Legal print set, resembling a detailed sketch rather than a stencil. Banksy used a well-known source image of former American President George W. Bush de-planing a military bomber. A figure in the foreground holds up a cue card with the word “APPLAUSE” emblazoned across it, as if to say, “You are expected to act like this man who sent your country to war is a hero, so act like it.” The viewer becomes a participant in an absurd talk show where pointless and perhaps even egregious activities are applauded simply because someone told them it was the appropriate time to do so. Bansky’s friend and fellow graffiti writer Shepard Fairey explained the artwork by saying “These things are ridiculous and we should recognize them as ridiculous.” 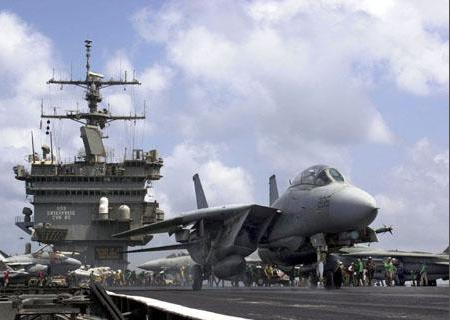 This is the original source image for Banksy’s Applause print and painting, which he did for the Barely Legal exhibition.

Applause was also created as a painting on canvas at the Barely Legal exhibition. After Modern Multiples printed the original editions of 100 for Barely Legal, POW took over and released an additional edition of 650 urban art prints for sale, with 100 signed.

Seen here is the transparency film for Banksy’s Applause print alongside the printed edition on the drying racks at Modern Multiples studio in LA shortly before Banksy’s Barely Legal exhibition.

If you would like to sell your Banksy art, the Barely Legal Print Set is a moment in history and are extremely rare, desirable, and profitable limited edition urban art prints. To purchase a signed set or a signed matched set is to own a part of Banksy’s artistic legacy at a groundbreaking point in his development, as well as the point in time that graffiti and urban art became worthy of critical consideration. Hexagon Gallery is the leader for Banksy art sales in the United States. To sell or buy Banksy art, please contact info@hexagongallery.com.